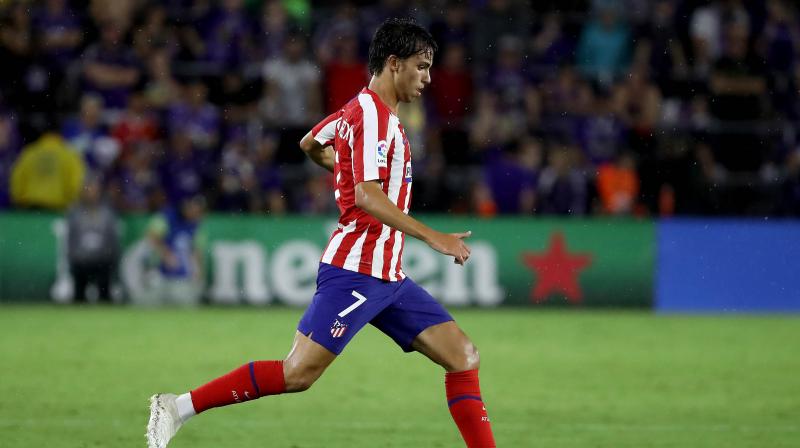 Felix scored a brilliant second to decide a match that failed to spark into action, a swathe of changes on both teams contributing to a decidedly low-tempo affair. (Photo: AFP)

Marcos Llorente, signed from city rivals Real this summer for USD 42 million, had put the Spanish side ahead in the first half before 19-year-old, USD 134 million striker Felix scored a brilliant second to decide a match that failed to spark into action, a swathe of changes on both teams contributing to a decidedly low-tempo affair.

Diego Costa's late third was no more than the visitors deserved. Los Angeles Galaxy star Zlatan Ibrahimovich was withdrawn after just 30 minutes and despite Wayne Rooney's best efforts in the first half, it was the La Liga side that was far superior.

"I haven't seen too much of Joao Felix but... he looks like he has good technique," Rooney told AFP. "I'm sure he will be a good player for Atletico in the near future."

The Spanish side spent plenty of money betting Rooney is right.

"Of course it's a big price to pay for such a young player but that's the way the market is going now," Rooney told AFP. "Everyone is spending a lot of money.

"I remember a few years ago, Zinedine Zidane went for over USD 60 million and everyone was saying 'What's going on?' But that's the price you have to pay now."

Madrid manager Diego Simeone refused to single out any of his new players, including Felix.

"I've been pleased with all the new signings and the path we are going on during this pre-season," Simeone said.

Inclement weather in the Orlando area delayed kickoff before a sellout crowd for 40 minutes but the rain failed to dampen an excellent atmosphere for the North American league's annual exhibition match.

Rooney, the former Manchester United and England forward, was operating in a deep-lying midfield role and saw plenty of the ball in the opening stages without being able to penetrate the Spanish team's defence.

Ibrahimovich, who had barely touched the ball, was withdrawn on 30 minutes, much to the disappointment of the 25,527 spectators who hoped to see the mercurial Swedish superstar in the action.

Atletico's opening goal on 43 minutes was a superb team effort, Riquelme brilliantly back flicking the ball to Llorente, who drove the ball past Philadelphia Union goalkeeper Andre Blake.

James O'Connor, the Orlando City coach in charge of the All-Stars, completely changed his team at half-time, including withdrawing Rooney and Nani.

It was one of the substitutes, Diego Rossi, who almost equalized when his close-range effort hit the side netting before Nicolas Lodeiro was denied by Atleti keeper Antonio Adan.

On 55 minutes, Simeone shuffled his pack by making seven changes of his own including introducing Felix, who was signed from Benfica this summer, and his superb long-range effort in the 84th minute sealed a comprehensive victory.

Costa made it three at the death from close range.