Spain joined the likes of Argentina and Portugal on the flight back home. 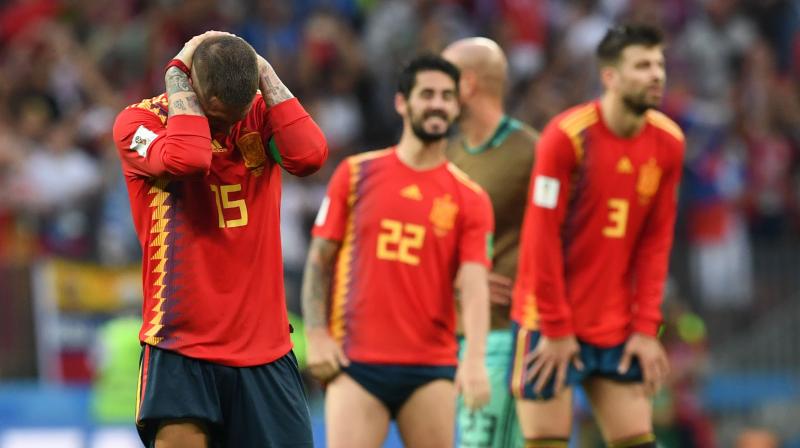 With big fishes such as Portugal, Argentina and Spain out, the likes of Denmark, Sweden, Switzerland, Croatia, England and Colombia will now fancy their chances of making it to the quarters. (Photo: AFP)

Moscow: Russia produced a miracle at the Luzniki Stadium in Moscow on Sunday as they kicked out Spain from the FIFA World Cup 2018 on penalties. Spain grabbed the early lead in the match after an own goal from Ignashevich early on but the hosts found a way back through Artem Dzyuba.

Fernando Hierro’s men continued to dominate possession with Russia happy to sit back and let the opposition take charge. However, both sides were denied any goal-scoring opportunities due to a spark in the final third.

Action headed towards extra-time where Spain continued to pile the pressure but were left fruitless. It came down to penalties and the men in white held their nerves to edge their opponents as Koke and Iago Aspas were denied by Igor Akinfeev.

With big fishes such as Portugal, Argentina and Spain out, the likes of Denmark, Sweden, Switzerland, Croatia, England and Colombia will now fancy their chances of making it to the quarters.

PENALTY MISSED Aspas takes a long run-up and is denied by Akinfeev's foot after a shot right at the center. Russia cannot believe it and the crowd is going wild. The 2010 World champions are dispatched.

The Luzhniki has exploded into a sea of celebrations. The hosts are into the quarter-finals!#ESPRUS pic.twitter.com/tXt1IvxVdN

PENALTY SCORED Golovin smashes it low in front and De Gea can do nothing.

PENALTY MISSED! Akinfeev gets it right and denies Koke

Now is the time when #WorldCup heroes can be born 🦹‍♂️#ESPRUS pic.twitter.com/AUculor0J2

120' PEEP PEEP! It's the final whistle and we are heading towards penalties.

120' Rodrigo unleashes a shot after being found in the middle but Akinfeev comes to the rescue again.

119' Alba combines well with Iniesta on the left hand edge of the box but Fernandes makes sure there is no real danger.

117' Smolov wins a corner for his side but Spain head it out of danger.

114' PENALTY SHOUT! Koke floats a cross into the box via a free-kick on the left and few Spain players including Busquets, Ramos and Pique feel they have been manhandled. The referee seeks VAR assistance but everything is fine.

112' Spain are pushing, surging for the winner but Russia have been resilient.

108' FINE SAVVEEEEEE! Rodrigo bamboozles his marked with a fine turn and rushes inside the box before his shot is saved by Akinfeev. A rebound shot is taken but it flies over the bar.

#ESP are the first team in at least 50 years to attempt 1000 or more passes in a single #WorldCup game.

Into four-figures for passes but only one has led to a goal. 😐 pic.twitter.com/rxNVKd3nZF

106' Alba draws Iniesta in front of the box. The veteran midfielder takes a touch before firing a shot that is deflected into the path of Akinfeev.

FIRST HALF OF EXTRA-TIME: SPAIN 1 - 1 RUSSIA

100' Russia continue to soak the pressure

97' CLOOOOOOSE Koke is free on the edge of box. The Atletico man hurries and parries his shot over the crossbar!

92' Aspas finds a way past the Russia backline and forces a low cross, kept out by Kutepov.

90' Spain kick-off their first extra-time since the 2010 World Cup triumph.

Those passing stats, though... 👀#RUS not yet passed into submission, however!#ESPRUS pic.twitter.com/y7H9ZLtIay

90+2' Russia break on the counter and it's Smolov who cuts inside before curling a shot inches wide.

90' There will be four minutes of stoppage time.

88' Two consecutive corners for Spain is kept out by Kutepov. The third corner finds Ramos who only manages to head his effort towards the roof of the bar.

84' SAAAVVEEEEE! Alba pings a cross from the left which deflects and falls towards Iniesta. The substitute forces a fine save from Akinfeev and the goalkeeper also manages to get a fingertip to a follow-up shot by Aspas.

82' CLOOOOOSE! Koke finds space on the right but his cross into the box is cleared by Kutepov.

80' Russia are yet to register a shot in the second half.

79' SUBSTITUTION Final change for Spain as Iago Aspas is brought on for Diego Costa.

77' Russia are closing down space whenever Spain have the ball. Any drama left more?

75' GOOD DEFENDING! Iniesta carves out the opposition defence with a sublime through ball for Alba which is cleared by Fernandes.

72' Spain win a corner after the ball is miscued by Ignashevich. Asensio's cross finds no man inside the penalty box but Costa receives the ball on the bounce before a Russian defender intercepts it.

70' YELLOW CARD Zobnin stamps on Alba with a late challenge and is the second Russian booked.

65' Golovin links up well with Fernandes on the right before rushing into the box with speed. Ramos tries to keep him away from the ball but the forward goes down easily.

64' SUBSTITUTION Russia make their final changee as Smolov replaces Dzyuba. He scored twice against Spain during their friendly in November. Meanwhile, Iniesta is warming up on the sidelines with some words of advice by Hierro.

62' FREE-KICK Isco gives the ball away again and Mario Fernandes rushes on the right flank before Sergio Ramos comes in his way.

60' SUBSTITUTION Denis Cheryshev replaces Samedov. He scored in the wins against Saudi Arabia and Uruguay.

59' Nacho gets the ball on the right but his cross is flicked by David Silva wide across goal.

58' CHANCE! Isco plays a lovely one-two with Costa before the Real Madrid winger's shot squeezes past the Russian defense for a corner.

56' Samedov finds space on the right but Sergio Ramos makes an interception as the ball heads out for a corner.

55' Russia have been lucky to win possession on few instances but are failing to keep hold of the ball.

53' YELLOW CARD Kutepov is booked for a rash challenge on Isco. The resulting free-kick is slammed into the Russian wall and Spain win back possession.

49' Golovin brings down Nacho just near the touchline. Koke takes the free-kick but his cross is headed by Costa over the bar.

47' ALBAAAAAA! A loose ball pops up into the penalty box and Jordi Alba is present but not in full control. The Barcelona defender uses his thigh for an effort but Akinfeev dives to his left to make a stop.

45' The action resumes. Russia have made one change with Granat coming on for left-back Zhirkov.

What a game of football so far. Spain dominated the proceedings early on and eventually found the lead but a penalty from Dzyuba has Russia back in the game. This contest is up for grabs!

Not the numbers David De Gea is used to...#ESPRUS pic.twitter.com/5hPKNic3kj

45+1' SAVVEEEEEE! Silva from the right releases a exquisite ball which finds Costa in the penalty box. Akinfeev is alert and makes a fine save to keep the game alive.

41' GOOOOOOOOOOOALLLL! Russia roars again and the crowd is buzzing already. The striker sends David De Gea the wrong way and strikes his effort towards the bottom right corner.

He's having the tournament of his dreams 🤩

40' YELLOW CARD Pique is penalized for a hand ball.

39' PENALTY FOR RUSSIA! The hosts win a corner kick and Dzyuba's thumping header strikes the hand of Pique.

36' CLOOOOOOSE! Zhirkov plays a lofted ball towards Dzyuba, who heads it to Golovin upfront. The hosts try finding a way through the Spanish wall before the ball finds the feet of Golovin who shoots his effort wide across the face of goal.

30' Zobnin rushes down the right flank and tries to whip in a cross inside the penalty box only to see it blocked by Isco. There's no keeping the Real Madrid star out of this contest.

28' Russia try to make something of a short corner but Diego Costa prevents Samedov from making space. Hosts lacking cutting edge in the final third.

25' Samedov loses possession and lets Isco float a ball towards Alba on the left channel. A heavy touch by the defender sees his trip and the ball is out for a goal-kick.

Update: #ESP in the first 35 minutes against #RUS:

20' Isco running the show for Spain in the middle of the park.

16' FACT: Russia have never won a World Cup game when they have conceded first.

11' GOOOOOOOALLL! Nacho wins a foul on the right side and Isco takes up the free-kick. Ignashevich attempts to avoid Ramos from the incoming delivery but heels it back into his own net.

Ramos is so dangerous at corners he doesn't even need to touch the ball these days... 😅#ESPRUS pic.twitter.com/ZnZNji0QNB

7' The men in red are pushing forward already and are desperate for an early lead.

Russia hope for a miracle as they face the mighty Spain in a knockout contest of the 2018 FIFA World Cup at the Luzniki Stadium in Moscow on Sunday. The hosts started off the tournament in stunning fashion with impressive wins over Saudi Arabia and Egypt before being dealt a reality check by Uruguay.

But after being written off at the start of the tournament, Stanislav Cherchesov's side will aim to leave a mark, even if that means facing the 2010 World Cup champions.

Spain, meanwhile, finished on top of their group which included the likes of Portugal, Iran and Morocco – all out of the tournament. After taking over from Julen Lopetegui, Fernando Hierro still looks for methods to extract the best out of this talented squad.

Here is how both the teams shape up for today's knockout

How would you have lined them up for this game? pic.twitter.com/VggM8Lw1To

The match will take place at the Luzniki Stadium in Moscow.