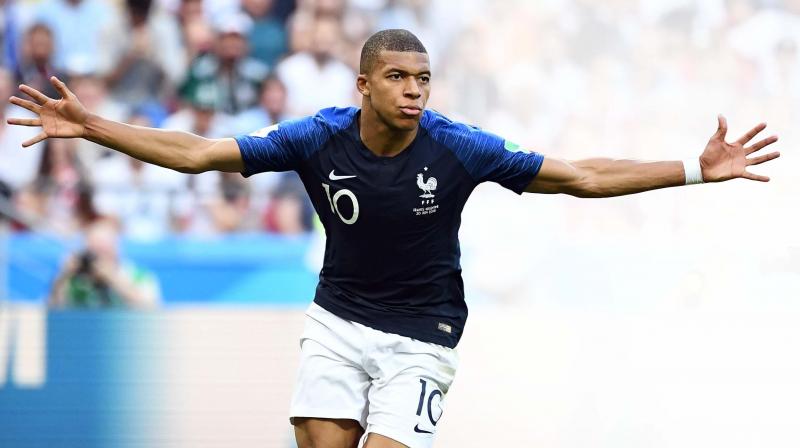 Kylian Mbappe celebrates after scoring his side’s third goal against Argentina at the Kazan Arena on Saturday. (Photo: AFP )

Kazan: On a beautiful, sunny day at the Kazan Arena south-east of Moscow, a star was born while a super star faded away as France edged out Argentina 4-3 in a World Cup epic on Saturday to reach the quarterfinals. Nineteen-year-old Kylian Mbappe upstaged the legendary Lionel Messi with a brilliant brace besides winning a penalty to see his team through.

Mbappe is the first teenager to score two goals in a World Cup knock-out match since Pele 60 years ago. The Frenchman may also have forced Messi into international retirement once and for all. Coming of age can’t get any better than this. Mbappe was born in 1998, the year France won their only World Cup.

Messi, on the other hand, bowed out of the World Cup without a goal in the knock-out stage in four editions. Not having the winner’s medal would be an albatross around his neck that he would never be able to shake off. But losing to the exciting French team was no disgrace. Messi may well have lost to the eventual champions, as he did the last time around. Two assists on the evening would be a scant consolation for one of the greatest players of all time.

The seven-goal classic was the injection of confidence Les Bleus needed to push for their second title. They, sure, have a squad to go all the way. There had never been any doubt about Mbappe’s talent and the Paris Saint-Germain forward chose the grandest of stages to announce it to the uninitiated.

Never before had a teenager played so spectacularly in a World Cup knock-out round since Pele destroyed Mbappe’s country with a hat-trick in the semi-final of the 1958 World Cup. France scored three goals in a 11-minute second-half blitz, which was more than they had managed to from open play in their first three matches here.

It was hard to believe that Kazan was part of Russia as its football arena was swathed in the sky blue of Argentina. Except for a section of French fans behind the goal on the left side, the Kazan Arena resembled a ground straight out of Buenos Aires.

Antoine Griezmann shook the bar with a free kick early on before putting France ahead from the spot in the 13th minute after Argentine defender Marcos Rojo had bundled Mbappe over following a quick counter. Mbappe’s searing pace singed Rojo, forcing him into a clumsy challenge.

Argentina were back in the game before half-time and how. Angel Di Maria, Mbappe’s team-mate at PSG, blasted the ball in from 30 yards with a majestic swing of his left-foot. Goalkeeper Hugo Lloris couldn’t do anything more than hurting the Kazan air. The goal lifted Argentina.

Argentina went ahead right after resumption after Messi’s shot from the right took a deflection off Gabriel Mercado to hit the target. But the French were not out, as they stepped up the offensive confidently. Full-back Benjamin Pavard made it 2-2 with a sensational strike, his first goal for France, from the edge of the box after Lucas Fernandez had whipped in a cross from the left.