Jhingan gears up for IC Cup

He has led the side to a tri-nation cup here and the defender will eye a similar outcome in June. 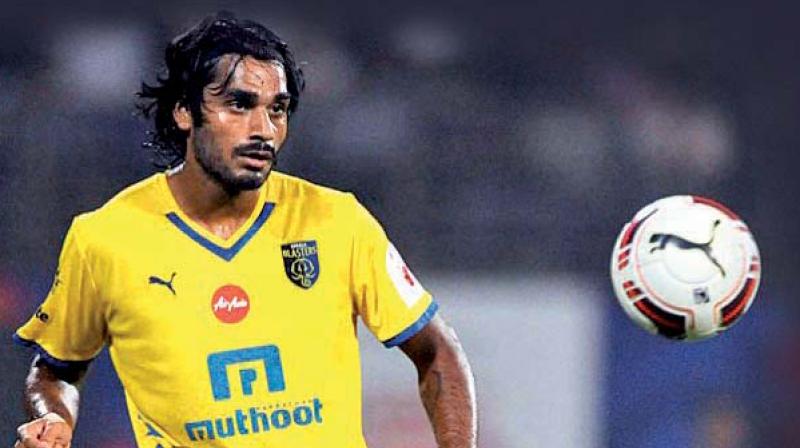 On Sunday night, when Manchester United’s Marouane Fellaini secured three points for his team in the dying minutes of the game, many Arsenal fans went home with yet another disappointing result away from home. Not the fans at Old Trafford, England but the ones who were present at the screening in High Street Phoenix Mall, Lower Parel. Among the red and white jerseys, a tall built-up man with an extensive beard in a tasteful coat was elated as the Belgian head the ball home like he would do on the pitch if needed.

He was Indian football team’s defender, Sandesh Jhingan who was in the crowd for the screening of the game organised by Star Sports.  The 24-year old defender’s admiration for the Manchester club grew with time as he was inspired by Nemanja Vidic. Jhingan plays at the centre-back position just like the Serbian did.

He will be in the city again for the Intercontinental Cup which will commence from June 1 to 10.

“The priority is the Interconti-nental Cup. Our aim is to play as many friendly games as we can and go to the cup with full strength mentally and physically. I don’t want to go there and let my team down. We don’t want to go for just participation sake,” he asserts.

New Zealand, South Africa and Chinese Taipei are the other three teams that will be a part of the tournament. While India (97) is ranked above the Kiwis (133) and Taipei (133), hosts of the 2010 FIFA World Cup South Africa (72) will be the highest ranked team in the tournament.

The Mumbai Football Arena has hosted a handful of games for the Indian team in the past including a tri-nation cup. The men in blue have not been beaten on the ground yet.

In the tri-nation cup, Jhingan was wearing the captain’s armband in absence of Sunil Chhetri who has been one of the most successful footballers in the country and his goals speak for that. But when the time comes, it could be the Jhingan who would lead the team in future. “I was always ready for it (captaincy),” he answers with a laugh.

“A lot of people ask me what has changed since I’ve become the captain and I’ve said many times that nothing has changed. I’m the same player in the dressing room. It’s good when the coaches recognize you,” Jjomgam added.

The national coach Stephen Constantine has applauded him in the past backing him to play in the bigger leagues.

On a personal level, Jhingan did not have the best season in the Indian Super League with Kerala Blasters FC with the team finishing number 6 on the table.

Even Rene Meulensteen who was sacked after a disastrous start criticised the Kerala skipper on his ‘professionalism’.

Putting all of that behind, the defender feels that there were fine positives to be picked from the season. “(The season was) a bit disappointing but there were a lot of positives. Last year we went to the finals and this year we wanted to go a step ahead. But like I said there were many positives from this season. Many young players have come up for us and I’m really happy with that,” he says.

However, at the moment the defender is concerned about only one thing — whether the team India continue the unbeaten run in Mumbai or will opponents like South Africa and others will manage to end the winning run. Well,  We’ll find that out only in June when the tournament starts.