Gennaro Gattuso's side have slumped to consecutive defeats for the first time since December. 2017. 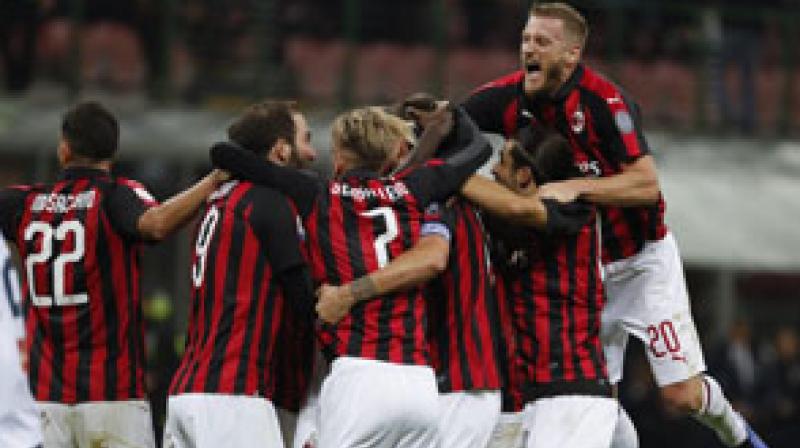 Milan remain fourth two points behind Inter who also fell to a 1-0 home defeat against Lazio at the weekend, with Roma dropping out of the European places with a 4-1 defeat to Napoli. (Photo: AP/PTI)

Milan: AC Milan host Udinese on Tuesday in the first of a crucial Serie A double-header before taking on title-holders Juventus in Turin four days later in a week which could be crucial for their Champions League ambitions. Gennaro Gattuso's side have slumped to consecutive defeats for the first time since December 2017 with losses to Inter Milan (3-2) and Sampdoria (1-0). Milan remain fourth two points behind Inter who also fell to a 1-0 home defeat against Lazio at the weekend, with Roma dropping out of the European places with a 4-1 defeat to Napoli.

The hunt for Champions League spot is tight with just six points separating AC Milan in fourth on 51 points and Torino (45) in ninth position. In between there are Lazio, Atalanta, Roma and Sampdoria in the running. "I'm not seeing a team that is completely off its game," insisted Gattuso. "But one fact still remains: we're standing here talking about another defeat."

Lazio have a chance to move into the Champions League places as they host strugglers SPAL. Holders Juventus travel to 13th-placed Cagliari nurturing a 15-point lead on Napoli as they warm-up for their European quarter-final clash against Ajax next week. Cristiano Ronaldo remains absent as he recovers from a thigh injury but coach Massimiliano Allegri showed he has options at his disposal with teenager Moise Kean stepping up to score the winner against Empoli at the weekend.

"Four victories remain, but on Tuesday we'll go to Cagliari against a team who will try to cause an upset," said Allegri. Carlo Ancelotti's second-placed outfit travel to Empoli after their confidence-boosting win over Roma at the Stadio Olimpico, before hosting Genoa next Sunday.