Mbappe struck in the 74th minute to put PSG on 80 points from 29 games and on the brink of retaining the title with second-placed Lille. 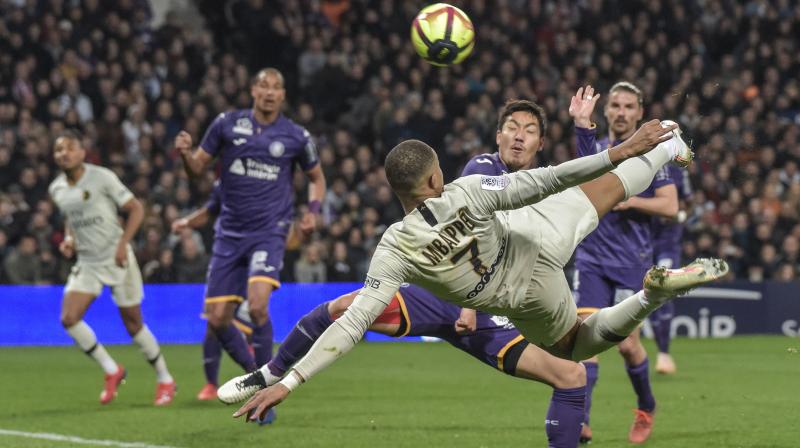 Paris: Paris St Germain forward Kylian Mbappe scored his 27th goal of the season as the runaway leaders edged closer to the Ligue 1 title with a hard-fought 1-0 win at Toulouse on Sunday.

Mbappe struck in the 74th minute to put PSG on 80 points from 29 games and on the brink of retaining the title with second-placed Lille, who beat Nantes 3-2 away earlier on Sunday, still 20 points behind having played a game more.

Thomas Tuchel’s side will be crowned next weekend if they beat Racing Strasbourg and Lille fail to win at Stade de Reims.

PSG are looking to become the first club in the French top flight to reach 100 points and to beat the record of most goals scored (118), held by RC Paris since the 1959-60 season.

PSG dominated but Eric Choupo-Moting skied a sitter over the bar and Marquinhos had a goal disallowed for offside after a VAR review.

Mbappe, however, found the back of the net with a neat strike from inside the area from a Thilo Kehrer cross 16 minutes from time.

The Canaries were 2-0 up after a penalty by Valentin Eysseric and a second-half strike from Kalifa Coulibaly.

The visitors, however, turned the situation around in eight minutes.

Rafael Leao volleyed home to reduce the arrears in the 62nd minute and Nicolas Pepe levelled with a penalty in the 68th before Jonathan Bamba gave the northerners all three points a minute later by poking the ball home from Pepe’s cross.