Malik has used a photograph of Pakistan’s December 25, 2012 victory over India in the first Twenty 20 International in Bangalore. 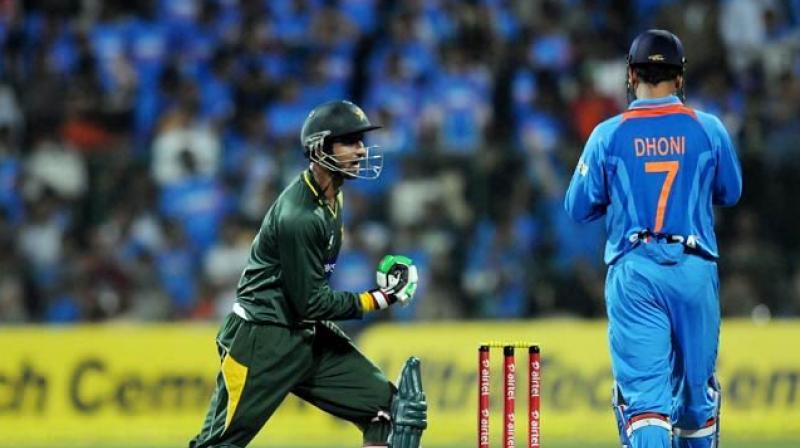 Malik has used a photograph of Pakistan’s December 25, 2012 victory over India in the first Twenty 20 International in Bangalore. The photograph records his own joy and the then Indian skipper Mahendra Singh Dhoni’s dismay at how the match turned out.

It may be recalled that Malik scored a winning shot, a sixer, off Jadeja’s bowling in the last over of the match. "You are playing against India, pressure is always there, but you have to play according to the situation", he had then said at the presentation when asked whether one member of his family won't be happy. "I scored runs, obviously everyone will be happy."

“Merry Christmas dosto???? and a very happy 25th December”,(sic) said Malik in his tweet. Few Indian cricket fans have reacted strongly to Malik’s message.“Jani gharnijana?”, one of them said, implying that Sania Mirza would not allow him into their house because of his style of greeting.

“Sania bhabhi won’t be happy after this pic shoaib bhai ????”, another fan said. On the other hand, Pakistani cricket fans were appreciative of the tweet. “Lol great choice of picture ????”, one responded. “Oh the Pun ??????????”, another tweeted.

“Uff what a six that was!! Game was getting away but then you finished it off:) My man!?,(sic) yet another reacted, thanking Shoaib Malik for the six and the victory the team achieved. However, not all Pakistani fans were as appreciative.

“In poor taste; grace doesn’t allow that”, said one of Malik’s own compatriots. Wonder why Sania Mirza’s husband decided to do so. However, cricket fans in India were not amused. It was in poor taste.

SAI, Hockey India draw up plans for next 16 months

US Tennis Association says best to not play now