The West Indies chased down a seemingly tough target of 322 with more than four overs to spare on Tuesday’s final day. 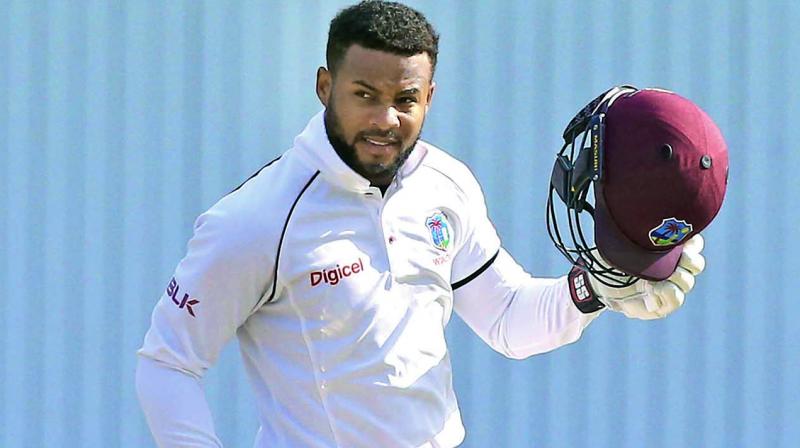 Shai Hope scored century in both innings against England at Headingley. (Photo: AFP)

Leeds: West Indies captain Jason Holder said he had never lost belief in his side after they vindicated his faith with a stunning five-wicket win over England in the second Test at Headingley. The West Indies chased down a seemingly tough target of 322 with more than four overs to spare on Tuesday’s final day. Shai Hope led the way with 118 not out as the West Indies won a Test in England for the first time in 17 years. None of Hope’s previous 11 Tests had yielded a hundred. But this match saw the 23-year-old Barbados batsman score two, with Tuesday’s knock following his first-innings 147.

Opener Kraigg Brathwaite fell just five runs short of also scoring twin hundreds at Headingley, combining with Hope for two partnerships worth 390 runs in total, including a key stand of 144 on Tuesday. The West Indies will now head to Lord’s for next week’s third Test all square at 1-1 in the three-match series following a win made all the more remarkable by their humiliating innings and 209-run defeat in the first Test at Edgbaston.

That inept display prompted West Indies great Curtly Ambrose to label the current side “embarrassing” and “pathetic”. “It feels really good, especially after the game in Edgbaston, it was a tough loss,” Holder said.

“A lot of teams would have crumbled coming back into the second Test match and probably would not have given England the fight that we gave them,” the towering all-rounder added. “I said at the beginning of this Test match that I back these guys to rebound and there was no better way to do it.”

The aptly-named Hope, the first batsman to score two hundreds in both innings in 127 years of first-class cricket at Headingley, was proud to have played his part in a morale-boosting success.

“It was mainly about winning the game, especially after the loss at Edgbaston. Knowing how much the fellas really wanted this win, you could see the fight and belief in the dressing room on the faces of the guys,” added Hope, the first West Indies batsman since Gordon Greenidge at Old Trafford in 1976 to score hundreds in both innings of a Test in England.