Bangladesh defeats Australia in the first Test in Dhaka

All-rounder Shakib Al Hasan took 5/85 to help the hosts dismiss Australia for 244 shortly into the second session on the fourth day. 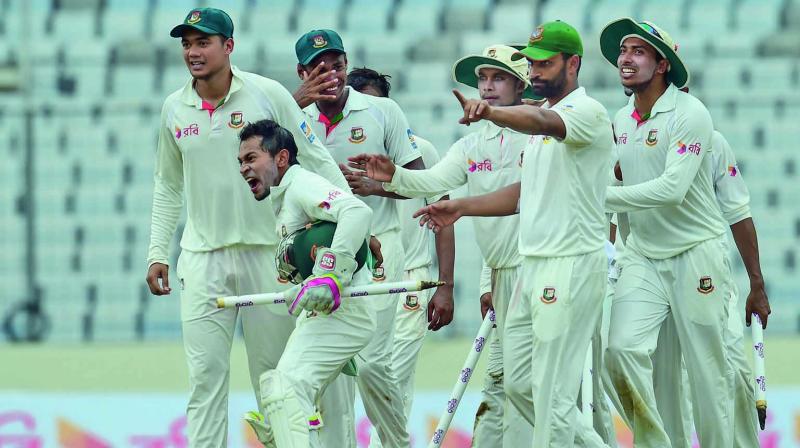 Bangladesh players celebrate their victory over Australia in the first Test at Dhaka on Wednesday. (Photo: AP)

Dhaka: Bangladesh on Wednesday registered their first-ever win over Australia in Test cricket, beating Steve Smith’s men by 20 runs in a thrilling match in Dhaka. All-rounder Shakib Al Hasan took 5/85 to help the hosts dismiss Australia for 244 shortly into the second session on the fourth day.

David Warner top-scored with 112 for the tourists, who were chasing a victory target of 265 after dismissing the hosts for 221 in their second innings. Shakib lived up to his billing as the world’s number one Test all-rounder, finishing with a match haul of 10 wickets with his left-arm spin and making 84 in Bangladesh’s first-innings total of 260.

Australia — who are touring Bangladesh for the first time in more than a decade — are currently ranked fourth to Bangladesh’s lowly ninth in ICC Test rankings. They appeared to be coasting towards their fifth consecutive Test win over the minnows when Warner and Smith resumed the day on 109/2.

Warner, who was unbeaten on 75 overnight, reached his 19th Test century off 121 balls with two runs off spinner Taijul Islam. But Shakib brought Bangladesh back into the game, dismissing both Warner and Smith (37) to put pressure on the tourists.

Pat Cummins hit a valiant 33 not out after Shakib bowled Glenn Maxwell (14) off the first ball of the second session, leaving Australia tottering on 199/8. Cummins hit three fours and two sixes to bring his side achingly close to a win, but Shakib’s spin partner Taijul brought the curtain down on the innings with his dismissal of Josh Hazlewood for nought. Hazlewood, who was already nursing an injury, has been ruled out of the second and final Test of the series.