Selectors face several crunch decisions ahead of the first test at Edgbaston starting on Thursday. 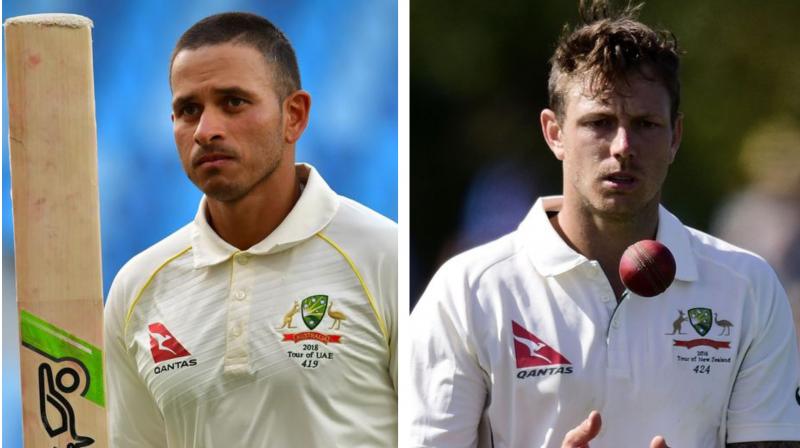 Usman Khawaja passed a fitness test on Monday after recovering from a hamstring injury and Langer confirmed the left-hander will bat at number three, while fast bowler James Pattinson is set to feature in his first test match since Feb. 2016. (Photo:AFP)

Usman Khawaja passed a fitness test on Monday after recovering from a hamstring injury and Langer confirmed the left-hander will bat at number three, while fast bowler James Pattinson is set to feature in his first test match since Feb. 2016.

“He’s a seasoned pro for us, he averages 40-odd in Test cricket, his hammy (hamstring) is good, he’s running well, he’s passed all the fitness tests so he’s ready to go. He’ll bat number three.”

On Pattinson’s return to the lineup, Langer added: (He’s) just a very, very good bowler. I’m sure (captain Tim Paine) will work out ways of using him.”

Selectors face several crunch decisions ahead of the first test at Edgbaston starting on Thursday, with Langer consigning Josh Hazlewood, Mitchell Starc and Peter Siddle to a three-way duel for the third specialist fast bowling spot.

“Like in all these selections, there’s literally a case for 17 blokes to play,” Langer said.

“There’s probably three to be fair, Starcy, Peter Siddle and Josh Hazlewood, for one spot.

“We won’t rotate them per se, but we’ll just pick the best three, probably not four, but three for every game. It won’t be different opposition, certainly different conditions.”

While Steve Smith and David Warner both featured and looked the part at the recent World Cup, Cameron Bancroft - the third player banned after the ball-tampering scandal in South Africa last year - is still working his way back into the team.

Bancroft earned his Ashes call-up with an unbeaten knock of 93 in the intra-squad match last week and is now vying with Marcus Harris to open the batting alongside Warner.

“It would be a great story if (Bancroft) comes back into the team. His development after what happened in Cape Town has been extraordinary,” Langer said of the 26-year-old he previously coached for Western Australia.

“We know what the reception is going to be. There’s nothing we can do about it. We don’t know (how he will cope) but we’ll find out. He’s a good kid and as tough as anyone you could meet.”