The couple was present at the Galle International Stadium, where Virat Kohli’s Team India posted a massive 304-run win over Sri Lanka. 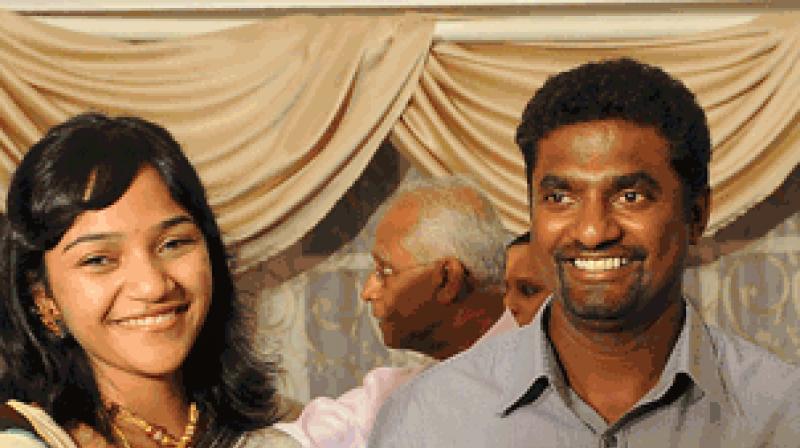 Mumbai: Madhimalar Muralitharan, wife of former Sri Lankan legend Muttiah Muralitharan remained neutral in terms of the team she supports in the ongoing Test series between Sri Lanka and India.

The couple was present at the Galle International Stadium, where Virat Kohli’s Team India posted a massive 304-run win over hosts Sri Lanka on Saturday.

Speaking over her mobile from Sri Lanka, the Indian- born from Chennai, said, "I love India and Sri Lanka, and I am equally proud and happy to see them (India) win".

She also added that their 10-year old son Naren Muralitharan is an avid follower of cricket and supports the Sri Lankan team.

"Our son 10-year-old Naren is a huge Sri Lankan fan. He follows all matches and is very passionate about cricket", she added.

Interestingly, Muralitharan’s last Test was played at the same venue against the same opponents India, where he ended his Test wicket tally of 800 wickets seven years ago.

Muralitharan got married to his Indian wife Madhimalar in 2005. Apart from their 10-year old son, they also have a five-year old daughter.

At the time of the marriage Madhimalar, who holds a degree in Business Management, had no interest in cricket. However, after her marriage she had rendered Murali her highest cooperation to his cricketing career.

Muralitharan is currently working as a mentor with Thiruvallur Veerans in the ongoing Tamil Nadu Premier League, which runs on till August 20.