'We need to move on quickly from England loss': Faf du Plessis

South Africa were thrashed by 104 runs by favourites England in the opening match of the ICC World Cup, which began at The Oval on Thursday. 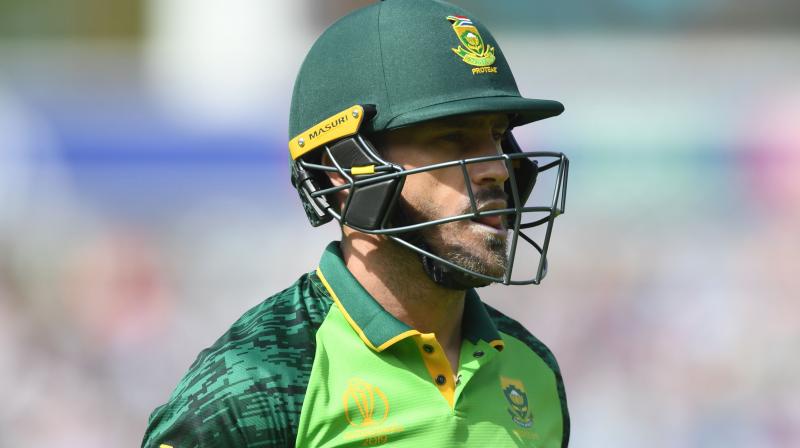 Du Plessis admitted they were outplayed in all facets of the game by England. (Photo: AFP)

London: South Africa will have to move on quickly from the drubbing it received in the World Cup opener against England and regroup themselves before its next game against Bangladesh, said captain Faf du Plessis.

South Africa were thrashed by 104 runs by favourites England in the opening match of the ICC World Cup, which began at The Oval on Thursday.

Asked to bat, England made 311 for eight and then bundled out the Proteas for 207.

Du Plessis admitted they were outplayed in all facets of the game by England.

"You are going to play games and come up against opposition that are better than you. England beat us in all three facets of the game," Du Plessis said after the defeat.

South Africa will face Bangladesh in its second match at The Oval on Sunday.

South Africa witnessed a bad start to its chase when veteran opener Hashim Amla was forced to retire hurt after being hit on the head.

The right-hander later returned but by then Jofra Archer-led England bowling attack had already caused the damage.

"The flow of the innings, unfortunately, started with Hashim coming off. When you are chasing a big score like 312, you need a good start to settle the dressing room," Du Plessis said.

"A good start is really important. With him coming off, a few overs later Aiden (Markram) got out and then I got out. When you go three down, it becomes tough and the score looks big, it looks too far.

"The pitch was good enough."

Du Plessis backed his decision to start the innings with Imran Tahir in place of Kagiso Rabada and the ploy worked wonders as the leg-spinner got rid off Jonny Bairstow with the second delivery of the tournament.

"It was a plan. It was something we first thought about a year ago. When we played against England, I thought we want to go with him because it is different," Du Plessis said.

"At The Oval, you want to bowl two seamers first but we went with what I thought was the best way to get a wicket. I went with my gut.

"Imran had not bowled with the new ball before so he had been practising that for the last two weeks. He knew he was going to do that today," he added.