Sports   Cricket  31 May 2017  We've got what we wanted out of warm-up games: Dinesh Karthik
Sports, Cricket

We've got what we wanted out of warm-up games: Dinesh Karthik

Dinesh Karthik, who got out for a duck in the first warm-up game against New Zealand, tore apart the Bangladeshi attack with his 77-ball 94. 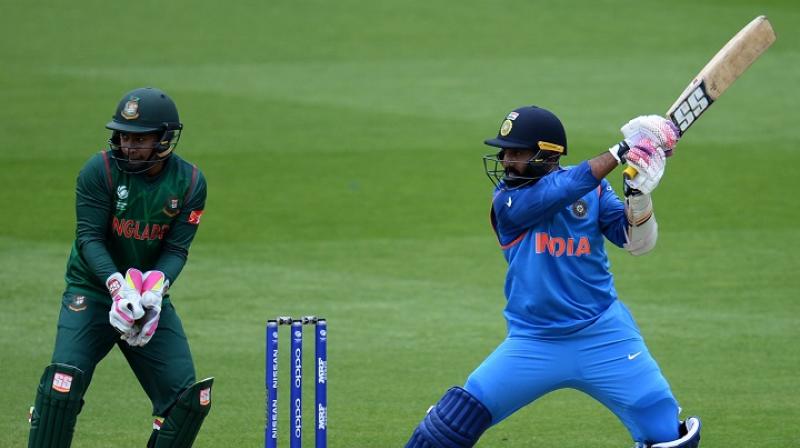 Dinesh Karthik, who got out for a duck in the first warm-up match against New Zealand, made full use of the opportunity in the second game as he tore apart the Bangladeshi attack in his 77-ball knock which was studded with 8 fours and a six.(Photo: AFP)

London: With India comfortably winning both the warm-up matches of the Champions Trophy, wicketkeeper-batsman Dinesh Karthik feels that the Men in Blue have got what was required out of the two practice games and are heading into the tournament feeling "fairly confident".

The Men in Blue were at their menacing best in all the departments in the two practice games against New Zealand and Bangladesh.

While the bowlers came to fore in the first game against the Black Caps where they bundled out a strong batting line up of Kiwis for just 189 and won the match by 45 runs through D/L method, it was an all-round performance with some solid batting backed up by hostile opening spell from pacers that helped India embarrass Bangladesh by 240 runs in the second warm-up game.

Among the batsmen, Karthik made a strong case for a middle-order slot with a stylish 94 off 77 balls.

Karthik, who got out for a duck in the first warm-up match against New Zealand, made full use of the opportunity in the second game as he tore apart the Bangladeshi attack in his 77-ball knock which was studded with 8 fours and a six.

The 31-year-old, along with Shikhar Dhawan (60) and Hardik Pandya (80*), helped India post a gigantic 324-6 in their 50 overs which the Indian bowlers defended with precision.

Chasing the target of 325, Bangladesh bowed down before the Indian pace-attack and were bundled out for mere 84 runs in just 23.5 overs.

Apart from Mehedi Hasan (24), Sunzamul Islam (18) and Mushfiqur Rahim (13), none of the Bangladeshi batsmen could stand the hostile fast bowling of the Indian pacers, especially Bhuvaneshwar kumar (3/13 in five overs) and Umesh Yadav (3/13 in five overs).

Both the pacers wrecked havoc on the Bangladeshi batsmen and it was such a sorry state of affairs for the minnows that they were 22-6 after eight overs.

Apart from the duo, Mohammed Shami, Jasprit Bumrah and Hardik Pandya also chipped in with a wicket each.

"I was really nervous in the first game. He (Kohli) was just talking to me and trying to ease me out, but it really didn't work. I was getting beaten every ball and I was feeling a little embarrassed out there," said Karthik after the match on Tuesday.

"But today, I felt there's an opportunity for me to trust myself and showcase my skills and so I enjoyed myself a little more," he added.

The wicketkeeper-batsman further said, "Whatever is required out of the practices matches, we have got that. In terms of batting and bowling, most of us have batted and most of the bowlers have bowled."

"We have ticked a lot of boxes and I think we are going into the tournament feeling fairly confident. At the same time not overconfident."

India won the last Champions Trophy in 2013 and head into the marquee event as favourites after a hugely successful home season with 10 Test wins.

The Men in Blue are number one in the Test rankings after series victories over New Zealand, England, Bangladesh and Australia, and would hope to carry that form into the Champions Trophy.

The Virat Kohli-led side will begin their title defence with the much anticipated clash against Pakistan on June 4 at Edgbaston, Birmingham.

Talking about the same, he said, "We are very much excited for the India-Pakistan match. We don't get to play Pakistan too many times these days, so whenever we do play a match, it's always great fun and great challenge."

"These are the memories you make as sportsmen. I am really looking forward to that match."

"There's always pressure on players of both the sides. So, it's going to be a great opportunity for both the teams to play the best cricket they can," he added.

While Pakistan hold a 2-1 lead over their fierce rivals and neighbours in the Champions Trophy, it is India who have won 10 out of the 11 contests at the World Cup and World T20 tournaments between the two sides.

Earlier, it always used to be Pakistan's bowling versus Indian batting. But the kind of bowling attack India has at present, the Men in Blue definitely hold the edge over Pakistan.

When asked about the same, Karthik said, "When it comes to India-Pakistan match, it is all about who can handle the pressure better. Whichever team handles the pressure in a better way-holds the edge."

"I am sure it will be a great game of cricket.There's so much hue and cry about it. You cannot run away from it but as a player, you need to channelize your vision and need to focus on the match. Everybody need to showcase what their skill is. And it doesn't matter who your opponent is," he added.

After the clash against Pakistan, India will face Sri Lanka and South Africa on June 8 and June 11 respectively.