KL Rahul remained consistent on one-end and then Miller came an both steadily added scores and handed over Punjab its second victory. 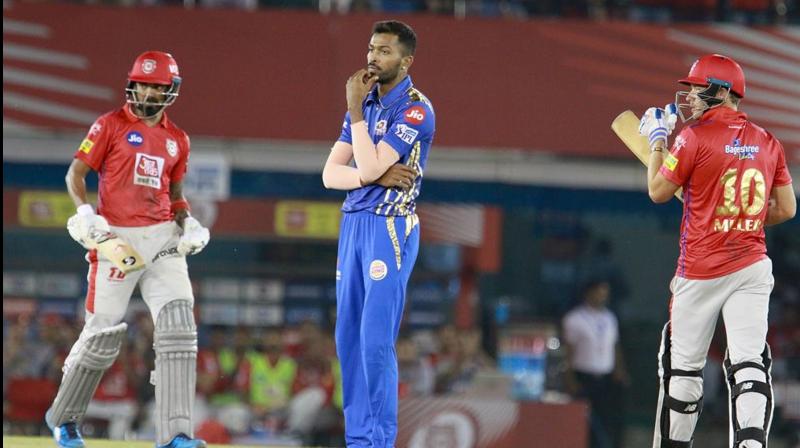 Chasing a target of 177, Punjab’s openers, Chris Gayle and KL Rahul, started off well as the duo formed a 53-run partnership after which Krunal Pandya dismissed Gayle when he was just 10 short from his half-century. (Photo: BCCI)

Mohali: Kings XI Punjab registered their second victory in this season of Indian Premier League (IPL) as they overpowered Mumbai Indian to win the match by eight wickets at PCA Stadium here on Saturday.

Chasing a target of 177, Punjab’s openers, Chris Gayle and KL Rahul, started off well as the duo formed a 53-run partnership after which Krunal Pandya dismissed Gayle when he was just 10 short from his half-century.

Mayank Aggarwal came to bat and showed a scintillating performance with the bat by hammering 43 runs off just 21 balls.

KL Rahul remained consistent on one-end and then Miller came to join the wicket-keeper batsman. Both steadily added scores to the scoreboard and handed over Punjab its second victory.

Earlier, Punjab won the toss and made the visitors bat first. Mumbai had a steady start as regular boundaries were being hit by both the openers, Rohit Sharma and Quinton de Kock, forming a partnership of 51 runs. Pacer Hardus Viljoen provided Punjab their first breakthrough in skipper Rohit Sharma.

In the very next over, Suryakumar Yadav (11) was sent to pavilion by Murugan Ashwin, who was playing his first match in this edition of IPL. Yuvraj Singh came out to bat on two down and both the on-field player stitched a 58-run partnership. Mohammed Shami broke the partnership by taking De Kock’s wicket who scored 60 off 39 balls.

Punjab bowlers then did not let any batsman dominate as they dismissed Yuvraj (18), Kieron Pollard (8), Krunal Pandya (10) in quick succession. Hardik Pandya’s 31 runs off 19 balls helped Mumbai set a respectable total of 176 for the loss of seven wickets.

Punjab will next host Delhi Capitals on Monday while Mumbai Indians will host Chennai Super Kings on April 3.