Sports   Cricket  31 Mar 2019  Australia's prime bowlers say there was no feud between them and Warner
Sports, Cricket

Local media, however, reported on Thursday that the bowlers had considered boycotting the match if Warner was selected. 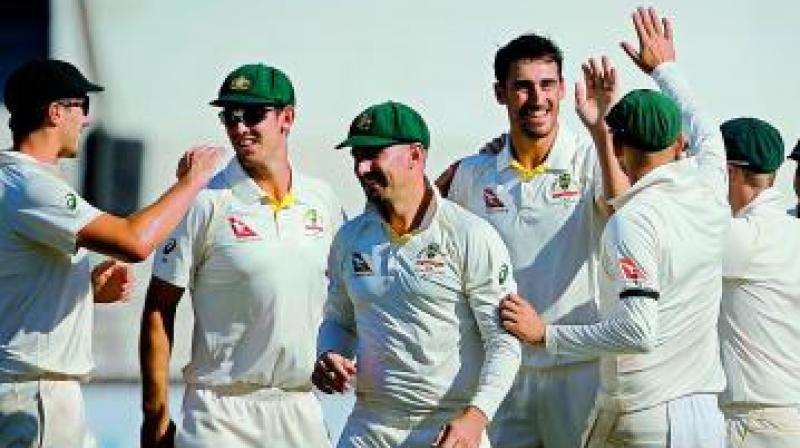 'We are extremely disappointed in an article (that) claims we intended to withdraw from the fourth test during last year’s tour of South Africa had David Warner been free to play', the four bowlers said in a Cricket Australia statement on Sunday. (Photo:AFP)

Vice captain Warner was suspended for the match in the immediate aftermath of a ball-tampering scandal in the third test in Cape Town, which resulted in a 12-month ban for the opening batsman and captain Steve Smith.

Local media, however, reported on Thursday that the bowlers had considered boycotting the match if Warner, who was identified as the instigator of the plot for Cameron Bancroft to scuff up the ball with sandpaper, was selected.

“We are extremely disappointed in an article (that) claims we intended to withdraw from the fourth test during last year’s tour of South Africa had David Warner been free to play,” the four bowlers said in a Cricket Australia statement on Sunday.

“This claim is disappointing on a number of fronts but most importantly because it is false.

“As a team we are all focused on moving forward together and helping the Australian men’s team prepare for the World Cup and the Ashes.”

The statement is the latest episode in the long-running scandal, which forced Cricket Australia into a major overhaul of its organisational culture and administration after a damning review labelled it as ‘arrogant’ which had produced a ‘win-at-all-costs’ mentality in the team.

That hyper-aggressive mindset has disappeared under current test captain Tim Paine and his one-day counterpart Aaron Finch, but the board are keen on ushering Warner and Smith - their bans ended on Thursday - back into the side as quickly as possible.

CA have attempted to smooth the pair’s return to the national side and published a curated video on their website earlier this month in which they reunited with the team in the United Arab Emirates ahead of the one-day series against Pakistan.

While pundits have questioned whether the playing group are accepting of their return, many have said they would be welcomed back if selected for the May 30-July 14 World Cup in England and Wales and the Ashes series that follows.

Both Warner and Smith are currently playing in the Indian Premier League Twenty20 competition, while Finch’s side finish their five-match one-day series against Pakistan later on Sunday in Dubai.

They already hold a 4-0 advantage and have now won their last seven one-day internationals in succession.