Smith, having scored an unbeaten 141 in Brisbane and 239 in Perth, came to the crease before lunch on Day 4, his team's score at 65 for two. 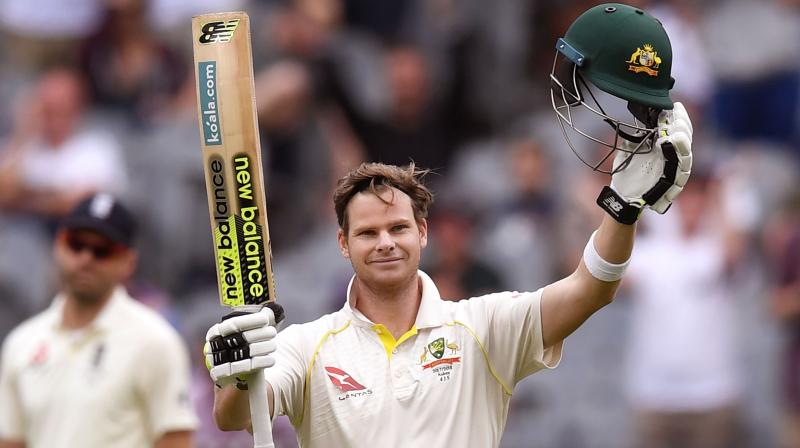 Steve Smith marched off unbeaten after a 275-ball knock of 102, having nudged Australia to 263 for four and a lead of 99 runs before the captains called it off midway through the final session.(Photo: AFP)

Melbourne: Australia captain Steve Smith tormented England with another century as the fourth Ashes Test ended in a frustrating draw for Joe Root’s side on a lifeless Melbourne Cricket Ground pitch on Saturday.

Smith marched off unbeaten after a 275-ball knock of 102, having nudged Australia to 263 for four and a lead of 99 runs before the captains called it off midway through the final session.

Number six batsman Mitchell Marsh was as stubborn as his captain, scoring 29 from 166 balls to protect his wicket through the last two sessions.

The unyielding drop-in pitch may have been England’s biggest obstacle, however, refusing to offer their bowlers any encouragement in terms of pace, movement or turn.

“I don’t think it’s good for anyone,” Smith told reporters of the wicket after his third century of the series.

”There was absolutely nothing in it for the bowlers.

“I’m enjoying (batting), shame we had to call it off in the last hour, I could have had another hour out there.”

With Man-of-the-Match Alastair Cook finding form with an unbeaten 244, the tourists can perhaps claim a moral victory after their batsmen built a first-innings lead of 164 runs.

But they will still head into the fifth and final Test 3-0 down in the series and desperate for a face-saving win at the Sydney Cricket Ground.

While stopping short of criticising the pitch, Root said his side had performed so well in dismissing the hosts for 327 in their first innings.

“On a very unresponsive wicket, to perform how we did on that first and second day with the ball was outstanding,” he said.

“Disappointed that we couldn’t quite crack it open today but we tried out absolutely everything.”

Smith, having scored an unbeaten 141 in Brisbane and 239 in Perth, came to the crease before lunch on day four, his team vulnerable at 65 for two.

He had to dig them out of another rough patch when England grabbed two late wickets early on Saturday to leave Australia wobbling at 178 for four.

The skipper brought up his century by cutting part-time legspinner Dawid Malan for a single, but there was no fist-pump or roar of celebration as in the previous matches.

The 28-year-old simply raised his bat dutifully to the sparse fifth day crowd before battening down again.

Rain fell during lunch but cleared to give England ample time to find a breakthrough as Australia resumed on 178-4.

The tourists laboured fruitlessly, however, as Smith and Marsh proceeded with discipline, content to bat time rather than set a fourth-innings chase.

It had all looked so promising for Root’s men when they grabbed Australia’s fourth wicket on the cusp of lunch to leave their opponents just 14 runs ahead with six wickets remaining.

Paceman Stuart Broad had dismissed middle-order batsman Shaun Marsh for four with the last ball before the interval but Smith has proved a constant thorn in England’s side throughout the series.

Opener David Warner, who proved similarly irksome to the tourists in the match, soaked up 227 balls for his 86 before midday.

He brought up his slowest Test fifty with a late cut for two off all-rounder Chris Woakes and appeared cruising to another ton after his first innings 103.

However, he handed skipper Root a present on his 27th birthday, top-edging the part-time spinner with an attempted slog-sweep to be caught by James Vince.

Marsh survived for most of the last half-hour of the session before he was caught behind by wicketkeeper Jonny Bairstow, who took a sharp one-handed catch moving to his left.

Smith heads to Sydney comfortably top of the batting list with 604 runs in the series at an average of 151 but he was still rueful for dropping Cook on 66 and again on 153 as the former England skipper took the game away from Australia with his knock.

“That probably cost us quite a bit, too,” the 28-year-old said. “It was pretty hard to get in front of the game,” he added.