When play was abandoned for the day, Warner was on 40 with skipper Smith not out 25. 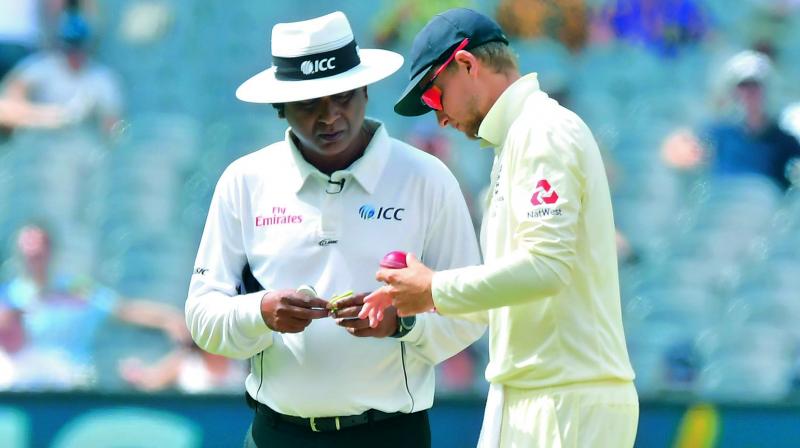 England skipper Joe Root (right) has umpire Sundaram Ravi check the condition of the ball on the fourth day of the fourth Ashes Test against Australia. (Photo: AP)

Melbourne: Rain hampered England’s bid for victory on the fourth day of the fourth Ashes Test on Friday, with David Warner and Steve Smith also keeping the tourists at bay.

The umpires called off play at 5:20 pm (0620 GMT) after persistent rain with Australia 103 for two and trailing the tourists by 61 runs after England's first innings ended on the first ball of the day at the Melbourne Cricket Ground.

When play was abandoned for the day, Warner was on 40 with skipper Smith not out 25.

The tourists, with all the momentum after Alastair Cook's record-breaking innings of 244 not out, snared the wickets of Cameron Bancroft and Usman Khawaja to send early jitters through the home side.

Bancroft hit four fours before he chopped Chris Woakes on to his stumps on 27, while Khawaja was caught behind off James Anderson for 11. England, pressing for their first victory in the already-decided Ashes series, were all out on their overnight total of 491 on the first ball of the day.

Anderson was caught by Bancroft at bat-pad off Pat Cummins for a duck to end the innings. Cummins finished with four for 117.

It meant that Cook achieved the highest score of anyone carrying his bat — the rare feat of batting throughout the innings — in Test cricket, bettering New Zealand’s Glenn Turner’s 223 not out against the West Indies in Kingston in 1972. The last Englishman to carry his bat in Tests was Mike Atherton, who scored 94 in New Zealand in 1997, while Geoff Boycott was the last in an Ashes innings with his unbeaten 99 in Perth in 1979.

Cook set a number of records on Thursday’s third day, when he surpassed the highest score by a visiting batsman in a Melbourne Test.