Given the flow he was in, the seven-time winners, though, could be disappointed with Himmat’s dismissal. 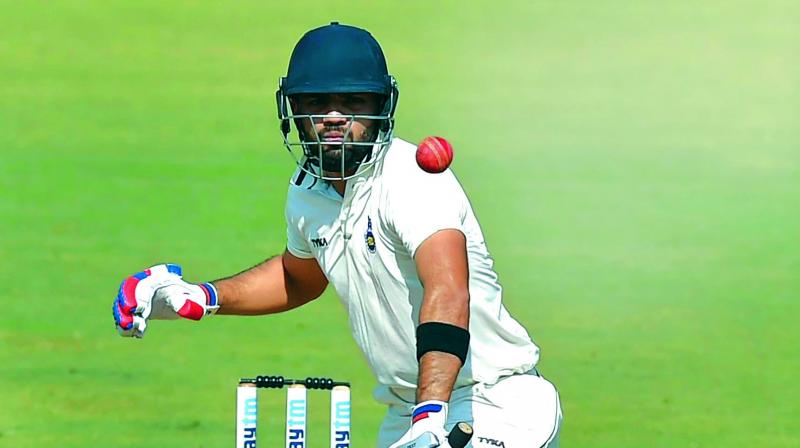 Delhi batsman Dhruv Shorey in action on Day One of the Ranji Trophy final against Vidarbha in Indore. (Photo: PTI)

Indore: Displaying steely resolve, Dhruv Shorey stood out with an unbeaten century and steered Delhi to 271/6, but Vidarbha did just enough to share honours on Day One of the Ranji Trophy final here.

The 256-ball 123 was Shorey’s third, and undoubtedly the most important, knock of his first-class career. Batting almost through the day, Shorey hit 17 boundaries.

The 25-year-old, who walked into bat in the very first over of the match following Kunal Chandela’s dismissal, survived testing opening spells by the Vidarbha seamers before opening up himself at the Holkar Stadium.

Shorey added 105 runs for the fifth wicket with Himmat Singh, who produced a fluent 66 off 72 balls with the help of eight boundaries and two sixes.

Considering that they lost their openers, including the seasoned Gautam Gambhir, within the first hour of the big final, Delhi would be contend with the way the day progressed.

Given the flow he was in, the seven-time winners, though, could be disappointed with Himmat’s dismissal. Himmat was going great guns, hoisting left-arm spinner Aditya Sarwate over long-on and long-off for sixes and punishing Rajneesh Gurbani for three boundaries in an over, before a debatable caught behind decision cut short his stay in the middle.

Thakare gave his team, a first-time finalist, as well as his first-class career a head-start as he removed Kunal Chandela in the first over. After beating the opener with an out-swinger, the India U-19 World Cup standby induced an edge with another away-going delivery, and skipper Faiz Fazal pounced on to the offer at first slip. Delhi were 1/1 in the big final, and in came Shorey to join Gambhir.

Vidarbha did not take long to break into another round of celebration as off-spinner Akshay Wakhare clean bowled Gambhir (15) with a ball that went straight through after hitting the batsman’s pad. It was a milestone of sorts for Wakhare as he reached his 200th wicket in front of a handful of spectators.

The side’s senior-most batsman back in the dressing room, Delhi needed a partnership, but that was not to be as Nitish Rana (21) was trapped in front of the wicket by Thakare.

Going through an indifferent run of form this season, Rishabh Pant (21) showed poor temperament when he slashed a wide delivery to give Gurbani his first wicket of the match.