The Bangadesh captain was suspended by the ICC after failing to report three corrupt approaches. 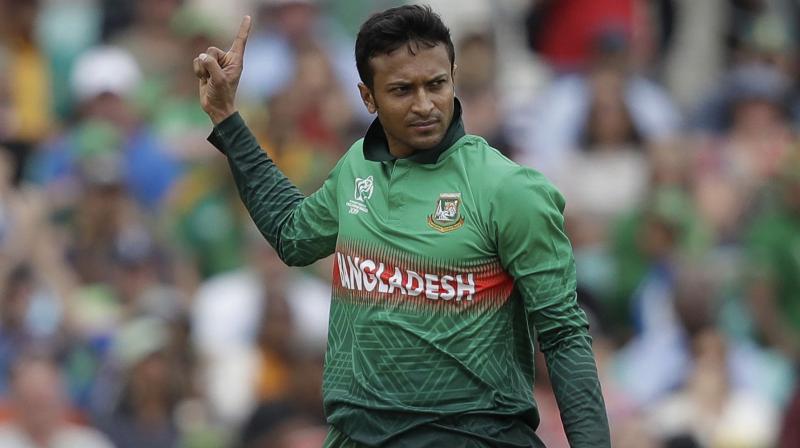 Twelve months of that ban is a suspended sentence which will come into effect if Shakib Al Hasan fails to comply with the anti-corruption code of the world body. (Photo: AP)

Dhaka/Dubai: Bangladesh captain and world number one ODI all-rounder Shakib Al Hasan was on Tuesday handed a two-year suspension by the ICC for failing to report three corrupt approaches, including one at the IPL, by a suspected Indian bookie, ousting him from the upcoming tour of India.

Twelve months of that ban is a suspended sentence which will come into effect if Shakib fails to comply with the anti-corruption code of the world body.

The one-year ban that he has to serve will keep him out of next year's Indian Premier League (IPL) and also the World T20 to be held in Australia from October 18 to November 15 the same year.

"I am obviously extremely sad to have been banned from the game I love, but I completely accept my sanction for not reporting the approaches," said Shakib, who is currently at No. 3, No. 1 and No. 2 in the ICC allrounders' rankings for Tests, ODIs and T20Is respectively.

"The ICC ACU is reliant on players to play a central part in the fight against corruption and I didn't do my duty in this instance," he said in a statement issued by the ICC.

In his absence, senior-most player Mushfiqur Rahim might lead Bangladesh in Tests while one among Mahmudullah Riyadh or Mosaddek Hosain is set to be the skipper in the three T20 Internationals.

The 32-year-old was being kept away from the team's ongoing practice sessions before the India tour on ICC's instructions. The series against India comprises three T20 Internationals and two Tests and gets underway in New Delhi with the shortest format games on November 3.

Shakib was spoken to by the ICC's Anti-Corruption Unit in January and August this year and he failed to report the approaches made to him by "an individual known to the ACU and suspected of involvement in corruption in cricket, Deepak Aggarwal."

The ICC said Aggarwal had asked Shakib to provide information on team composition and strategy on three separate occasions, one of them being April 26, 2018 when his IPL franchise Sunrisers Hyderabad was to take on Kings XI Punjab. Sunrisers won the game by 13 runs.

"These messages on 26 April 2018 included a number of deleted messages. He confirmed that these deleted messages contained requests from Mr Aggarwal for Inside Information," the ICC stated.

Aggarwal, the ICC said, wanted to meet Shakib but the cricketer didn't oblige as "he had concerns over Mr Aggarwal, feeling he was a bit 'dodgy', and that, following their conversations, he had the feeling that Mr Aggarwal was a bookie," it added.

Shakib, who escaped the maximum punishment of five years for the offence, will not have the right to appeal as he accepted the ICC's investigation and charges.

Shakib recently spearheaded a players' strike before calling it off after the BCB assured that their demands, including a pay hike, will be fulfilled.

He is unarguably one of the greats of the game in Bangladesh with more than 11,000 runs and over 500 wickets across three formats. He has played 56 Test, 206 ODIs and 76 T20I and had headed the ICC all-rounder rankings in all three formats numerous times since 2009.

The ICC said while Shakib's voluntary admission, cooperation during interviews worked in his favour, the fact that he failed to report advances made over months was an "aggravating" factor.

"Mr Al Hasan (Shakib) is an experienced international cricketer who, having participated in several anti-corruption education sessions, was fully aware of his responsibilities under the Code," the world body said in its judgement.

Shakib, who had amassed over 600 runs and picked up 11 wickets at the recent ODI World Cup in England, was handed a six-month suspension by the BCB in 2014 following a spat with former Bangladesh coach Chandika Hathurusingha regarding his Caribbean Premier League (CPL) commitments, and for his involvement in a brawl with a spectator during an ODI against India in Dhaka.