Recently, there has been a lot of debate surrounding the opener’s position in Tests for India. 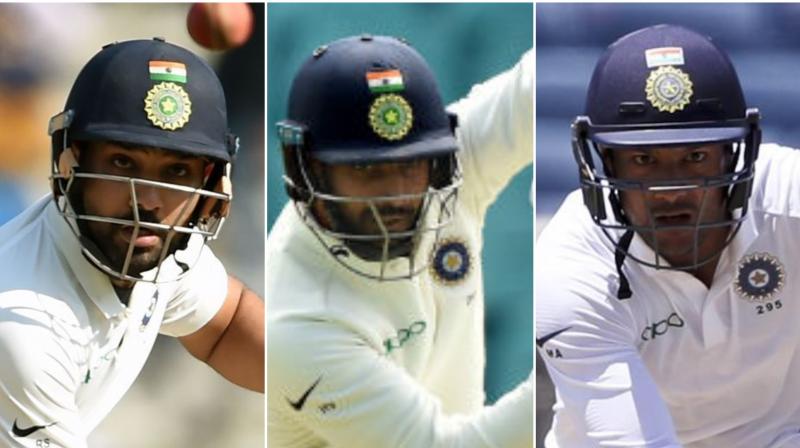 The opener’s position has been in constant turmoil ever since the departure of Virender Sehwag and Gautam Gambhir, who held the mantle of opening for India for quite a few years. (Photo: AFP/AP)

Mumbai: After engaging in a 1-1 tie against South Africa in the T20I series, India will look to bounce back with a series win over the Proteas. Rejuvenated by the return of players like Faf du Plessis, Dean Elgar, Vernon Philander and Aiden Markram, South Africa will be looking at a stronger return against India. The Du Plessis-led Test side will be hoping to retain the Freedom Trophy, but it will be a difficult thing to achieve for them as they will miss the service of retired players like AB de Villiers, Hashim Amla and Dale Steyn.

Recently, there has been a lot of debate surrounding the opener’s position in Tests for India. KL Rahul was tried in the recently concluded tour of West Indies, but his poor run of form made sure that he wasn’t selected in the Test squad against South Africa. The opener’s position has been in constant turmoil ever since the departure of Virender Sehwag and Gautam Gambhir, who held the mantle of opening for India for quite a few years.

Mayank Agarwal has emerged as a constant in India’s Test plans recently; meanwhile, the other opener’s position has been hotly debated. Several alternatives were considered for the position until finally, Rohit Sharma’s name popped up as the ideal opener for the team.

Here are a few pairs that the Indian team could try starting against South Africa. Let’s have a look at three options.

Despite a poor outing in West Indies, Mayank Agarwal has managed to retain his spot in the Test squad. In four innings, he managed to score just a single fifty. Injury to Prithvi Shaw played in his favour against Australia last year and this time around, Shaw’s doping violation ban made sure that he starts.

Rohit Sharma, on the other hand, is perhaps in the best form of his life in ODI cricket and people expect him to carry forward his form into Tests. After his exclusion from the Test squad against West Indies, there has been a huge support in Rohit’s favour to start him as an opener in Tests as well. It seems like people’s hopes have been heard as Rohit Sharma has been included in the Test squad against South Africa.

This duo will most probably start as openers when India takes on South Africa in Visakhapatnam on October 2.

India can also try this option of openers. Vihari was phenomenal against West Indies in the middle opener’s slot as he managed to score two half-centuries and one century in four innings. This performance has surely cemented his position in Tests. He has also stated that he is free to bat wherever the team wants him to, thereby displaying his flexibility both up and down the order.

The talent of Vihari combined with the experience of Rohit as openers is an exciting prospect and it could quite possibly do wonders for the team.

Both are young, domestic stalwarts looking to craft their niche in the Indian team. What better way than to start both of them together. There may be some problems early on due to their lack of experience playing for the national team, but, both seem to complement each other.

Although this duo may not be the one that starts on Wednesday, this is a very promising possibility especially considering the future of the Indian team.