Experienced batsman Tamim Iqbal (22) and Mominul Haque (28) were at the crease when stumps were drawn in 34 overs of batting. 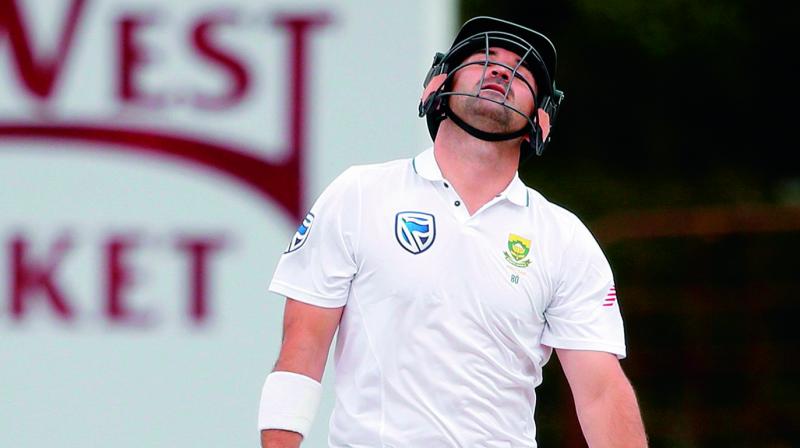 South Africa’s Dean Elgar reacts as he is dismissed for 199 by Bangladesh bowler Mustafizur Rahman on the second day of the first Test in Potchefstroom. (Photo: AFP)

Potchefstroom: Bangladesh were 137/3 in reply to South Africa’s mammoth 496/3 declared on the second day of the first Test here on Friday, still 369 runs in arrears.

Experienced batsman Tamim Iqbal (22) and Mominul Haque (28) were at the crease when stumps were drawn in 34 overs of batting.

Earlier, Dean Elgar was dismissed for 199 to provide a rare moment of respite for Bangladesh as South Africa piled on the runs at Senwes Park.

South Africa made 496/3 before declaring during the tea break. Opening batsman Elgar and Hashim Amla (137) put on 215 for the second wicket as South Africa again gave Bangladesh cause to regret their decision to send the hosts in to bat.

Elgar, who had gone past his previous highest Test score of 140, looked set for a double century until an attempted pull shot against Shafiul Islam looped off a top edge to short midwicket.