A.B…D of innovation: Be humble & fearless

De Villiers says Kohli the best batsman he has seen. 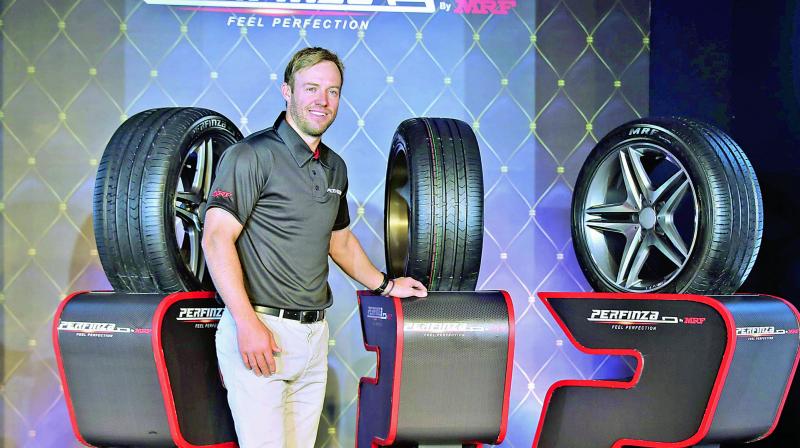 Chennai: “When you have your feet on the ground, the world around you is so much clearer,” said star South African batsman AB de Villiers while trying to explain how he pulls off extraordinary shots from unimaginable postures without showing any fear.

“Humility and fearlessness can go together,” said de Villiers, who has the nickname of “Mr 360 degree” for his shots all around the ground.

“I start playing those shots only when I reach that perfect situation where I’m absol- utely fearless and stop thinking about the ball that comes at 145kmph. It’s difficult for someone to teach you. It’s something you can do with hard work in addition to keeping your feet firmly on the ground!" added de Villiers who holds the record for the fastest fifty, hundred and 150 in ODIs.

de Villiers, who was in the city to promote MRF Tyres, said his game evolved as he started playing more and more in IPL. “When you have a deep desire to do special things, you find a way to innovate. I won’t say it’s necessarily the part of preparation. Those shots… I never had them in mind while growing up. I realised there are certain areas that I can start exposing the bowlers more and that’s when the innovation came through,” he said.

The South Africa, who recently stepped down from ODI captaincy and announced that he would return from a break to play all three formats, also spoke on a variety of subjects.

Excerpts:
How much longer will this AB show go on?
The last 12 months have been very important to me. I’m really finding my feet again. In a way, the break helped me press the reset button and remember what happened in the last 12-odd years. As I spent a lot of time with my family, I also realised what was more important to me in life. It also helped assess where I want to go in my career and what I need to achieve. I feel very refreshed, revived and ready to go hard again. I just want to enjoy the last few years of my career. Whether it is three or five or seven years, I don’t know.

A few critics accuse South African cricketers of giving more importance to IPL than playing for their country. What’s your reaction?
It’s up to the individual; they can play wherever they want to make themselves better cricketers. IPL has been an incredible lesson. But for me, my country always comes first. When you feel it’s time to step away from the game for a bit and that decision is entirely belongs to the player. I have given absolute dedication to represent my country for 12-13 years. I asked for a few months off to touch base with my family and I’m glad I did that.

The India-South Africa series has always been hard-fought. The two teams will face off again in January in SA…
I’m very much looking forward to it. Firstly, I haven’t played for a while. So, it’s not my decision whether I’am going to be in the team or not. Hopefully, I will be selected. No one has got the right to just walk into a team. I want to be in the best possible form to be selected in the Test side. The series against India is going to be great. They gave us a run for our money when we last played in South Africa. The ball turned a lot in Durban and Johannesburg in the last few series recently. Hopefully, not again! I think in Durban I need to talk to the curator (he laughs).

You are a livewire on the field. Is being the perfect athlete a big thing for you?
It is very important to be the perfect athlete. It’s something you can’t turn on and off. You have to work on for a long time. Whenever I’m on the field, I have got the desire to turn the game upside down, love taking brilliant catches on the field, the look of surprise on my teammates’ faces and also on the batsmen’s.

You played a lot of other sports at junior level. How much does it help you in cricket?
I grew up playing a lot of tennis, rugby, hockey and golf. I think playing competitive tennis from the age of five helped me a lot when I moved to Test cricket. The first few years of my junior tennis was very difficult as I would invariably end up crying while walking off the court. It took time to deal with it. Tennis improved my hand-eye coordination and footwork. I could have gone on to make it big in other sports. I have never been arrogant to say that I would have done special things in other sports. But I had talent in ball sports and cricket touched my heart in a special way when I was 16. I realised I could play the sport and go a long way.

The partnership that you shared with Virat Kohli in an IPL match in 2016 at Bengaluru was like a concert featuring a rock musician and a classical singer…
I love having Virat at the other end. The match against Gujarat was a special occasion. The ball was spinning quite a bit. But we both enjoyed being out there. We are completely different players. Virat, in his own way, is the best player I have ever seen. He says that quite a lot about me, which I don’t believe is true!