Amir, who missed the 2011 and 2015 WC due to a five-year ban for spot-fixing, was seen bowling using his full run-up in practice session. 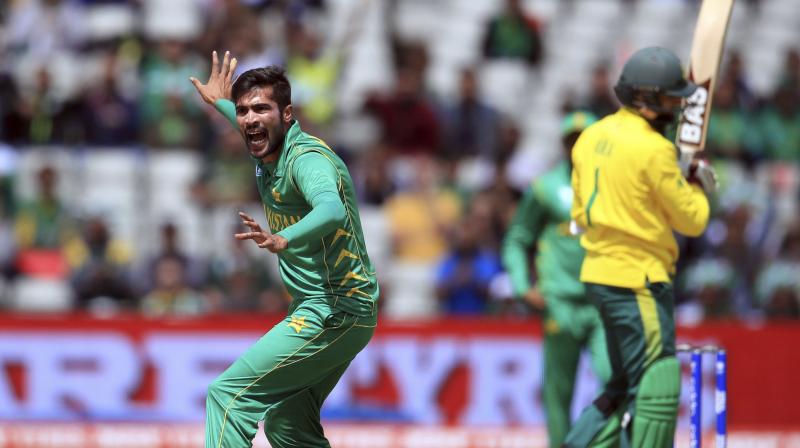 "Amir is fully fit and available for selection for tomorrow's game," Sarfaraz said in his pre-match press conference. (Photo: AP)

There was speculation that the 27-year-old, who missed the last four matches of the one-day international series against England earlier this month, might not be able to make his World Cup debut at Trent Bridge.

"Amir is fully fit and available for selection for tomorrow's game," Sarfaraz said in his pre-match press conference.

Amir, who missed the 2011 and 2015 World Cups due to a five-year ban for spot-fixing, was seen bowling using his full run-up in the team's practice session.

Sarfaraz said he hoped the team could put behind them a streak of 10 straight ODI defeats.

"Yes, we have lost 10 matches but we have to forget that and start the World Cup journey," he said.

Asked if he was worried about the short boundaries and a flat pitch at Trent Bridge, Sarfaraz said: "When we came here on the first day and asked the groundsman what is the par score he told us that it's 480."

Top-ranked England have scored 400-plus twice at this ground, 444-3 against Pakistan in 2016 and a world record of 481-6 against Australia last year.

"Cricket has changed. People used to think that 300 was a par score but it has changed. We will have different pitches in the World Cup so if a team scores 300-plus then the other team will also go for that," he said.

West Indies, who sneaked through last year's qualifying round to feature in this year's event, piled up 421 against New Zealand in a warm-up match on Tuesday.

With their powerful batting including Chris Gayle, Evin Lewis, Shai Hope and Andre Russell, Pakistan will be hard-pressed to contain them.

But Sarfaraz said taking wickets will be the key.

"If you want to contain any team you have to take wickets whoever you play, so it's important to put pressure by taking wickets."