Malala Yousafzai takes a dig at India ahead of World Cup 2019; see video

The much awaited encounter between India and Pakistan is scheduled on June 16 in Manchester. 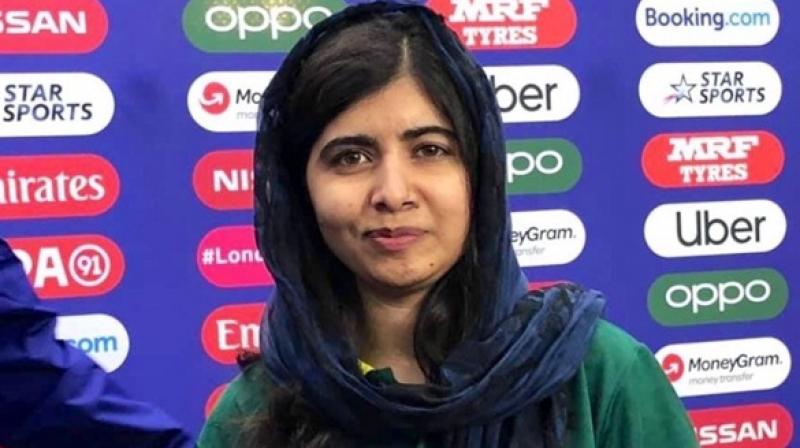 India has an upper hand over Pakistan in World Cup clashes, as the Men in Blue have defeated Pakistan in all the six games. (Malala Yousafzai/Twitter)

Mumbai: The rivalry between India and Pakistan cannot be ignored by any cricket fanatic. The competitiveness between both nations goes up a notch, especially during World Cup games. The Nobel peace prize winner from Pakistan-- Malala Yousufzai recently took a dig at India during the opening ceremony of World Cup 2019.

During the ceremony, a short competition called the 60-second was held, in which one cricket legend and one celebrity represented each nation. The only objective of the game was to score as many runs as possible in the span of sixty seconds. Cricketing legends like Viv Richards, Jacques Kallis, Brett Lee, Kevin Pietersen were the notable participants in the game.

England, led by Kevin Pietersen and Chris Hughes emerged as winners by putting up 74 runs on the board. Australia, led by Brett Lee and Pat Cash clinched the second spot with a total of 69 runs.

India was represented by Anil Kumble and Farhan Akhtar. The duo managed to amass only 19 runs in 60 seconds, eventually finishing last in the competition.  On the other hand, Pakistan scored exactly the double, accumulating 38 runs.

Pakistan finished seventh in the challenge, but it was not a matter of worry for Malala as Pakistan was successful in finishing a place above India. Hence, she could not resist taking a dig at arch-rivals India. “Pakistan, we were okay, not too bad, came No. 7…. but India came last!” said Malala.

You praise Pakistan, a nation where you can't go.
You demean India like a typical brainwashed Pakistani, yet India is a nation which you can safely visit.
Stop being petty and disgusting @Malala. pic.twitter.com/MGugFTKCfV

Malala stole the show at the opening ceremony. She also stressed the importance of women taking up sports. "I have been a big fan of cricket since my childhood. I used to play it on the streets, on rooftops. I still remember fighting with my brothers to let me play even if I get out. This sport connects people from different backgrounds, different cultures. It is uniting people from different countries,” added Malala.

The much-awaited encounter between India and Pakistan is scheduled on June 16 in Manchester. India has an upper hand over Pakistan in World Cup clashes, as Men in Blue have defeated Pakistan in all the six games.