The captains of the 10 teams also met Prince Harry at the Buckingham Palace in London. 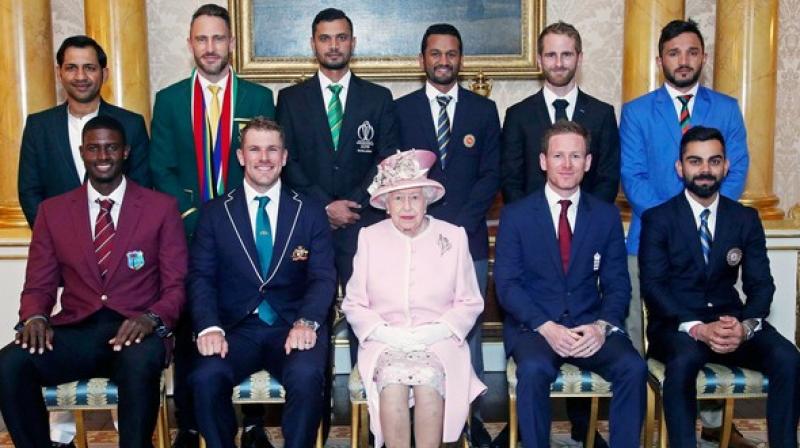 All ten captains of the participating teams in the Cricket World Cup paid a visit to Queen Elizabeth on Wednesday. (Photo: BCCI/TWitter)

New Delhi: All ten captains of the participating teams in the Cricket World Cup paid a visit to Queen Elizabeth on Wednesday. They also met Prince Harry at the Buckingham Palace in London. Board of Control for Cricket in India (BCCI) tweeted two pictures of the captains' meeting with the Queen.

In one picture all captains can be spotted with Queen Elizabeth and in another picture, Queen can be seen greeting the captains."The 10 #CWC19 Captains with the Queen," BCCI captioned one of the photos on Twitter.

The 10 #CWC19 Captains with the Queen. pic.twitter.com/cT42NfuPCv

"Skipper meets the Queen #CWC19," wrote BCCI in another tweet.

The Royal Family also posted a photo on Twitter of the meeting between the skippers and the Queen.
"Captains including @Eoin16 and @imVkohli met Her Majesty and His Royal Highness before joining a Garden Party at Buckingham Palace," The Royal Family posted on Twitter.

Captains including @Eoin16 and @imVkohli met Her Majesty and His Royal Highness before joining a Garden Party at Buckingham Palace. pic.twitter.com/AjS5eZBrVH

The visit came just before the opening ceremony held at the London Mall next to the Buckingham Palace. Many cricketing legends like Viv Richards, Anil Kumble, Jacques Kallis were involved in the opening ceremony. Nobel peace prize winner Malala Yousafzai represented Pakistan.

A unique 60-second challenge was played during the opening ceremony in which all teams were given one minute to score the maximum runs. England came out as the winners as they scored 74 in one minute whereas India finished at the bottom as they scored just 19. England takes on South Africa in the opening match of the World cup today at the Oval in London.