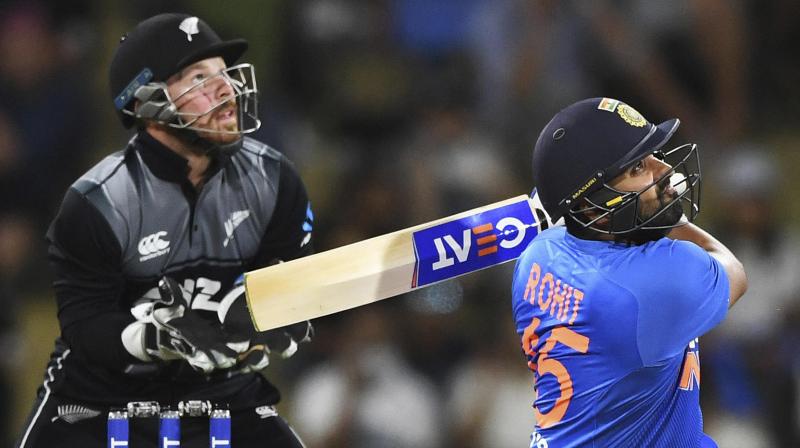 New Delhi: As the ace cricketer Rohit Sharma turns 33 today, let us go down the memory lane and relive the three double tons scored by the right-handed batsman in the ODI format.

Rohit, popularly known as the 'Hitman' made his ODI debut on June 23, 2007, but the batsman came into his known once he became the full-fledged opener in the limited formats.

Opening the batting, Rohit played his natural game and dominated the bowling attacks from the very start of his innings.

It is a testament to Rohit's aggressive batting abilities that he has three double tons to his name in the ODI format.

Batting first, Rohit was slow to start. But once, he had the measure of the wicket, Rohit started to go after the spin bowlers. After reaching his century, he shifted gears and went berserk. He went on to play a knock of 209 off just 158 balls. This innings helped India post 383 runs on the board, and the effort helped the side win the match by 57 runs.

Rohit Sharma’s second double hundred (264 runs off just 173 balls) came against Sri Lanka at the Eden Gardens, Kolkata. This remains the highest score by any batsman in the 50-over format to date. Given a reprive when he was four, the 32-year old made the most of it to add 260 more runs.

Again with India batting first, Rohit Sharma took the rival bowling by the scruff of its neck to knock off 208 runs from just 153 balls as the Men in Blue posted 392/4. The right-handed batsman's innings was studded with 13 fours and 12 sixes. This effort helped India win the match by 141 runs.

In the 2019 Cricket World Cup, Rohit Sharma finished the tournament as the highest run-scorer with 648 runs from just nine matches at an average of 81.00.

During the tournament, he had also become the first batsman to score five centuries in a single edition of the World Cup.

The limited-over vice-captain has so far scored 14,029 runs across all formats.

In the longest format, he has also reinvented himself and started opening the batting.