Warner escaped a run out chance while on 27 as fielder Mujeeb Ur Rahman could not gather the ball at midwicket in the fifth over. 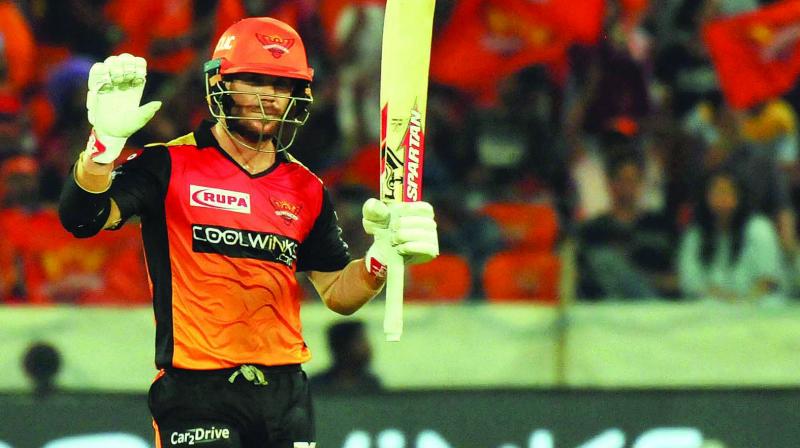 Hyderabad: The southern Sun proved too hot for the Kings from Punjab, who were roasted to a 45-run defeat that pushed them into a precarious position in the race for Playoffs here on a manic Monday night.

A towering 212 was too tall a total to surpass and the visitors were restricted to 167 for 8 amid roars of delight at the Rajiv Gandhi International Cricket Stadium. Barring K. L. Rahul’s 79 (56 balls, 4x4, 6x5) and his stands for 60 for the second wicket with Mayank Agarwal (27) and 53 for the sixth with Prabhsimran Singh (16) there was nothing to cheer for KXIP.

Earlier, David Warner went out of the IPL swinging. His energetic 81 that came off only 56 balls and contained seven fours and two sixes laid the foundation for a strong total.

Warner and his new opening partner Wriddhiman Saha got off the blocks in a flash, picking runs at will as the Sunrisers’ 50 came in just four overs. And at the end of power play, they were scorching at 77 without loss, the best score after six overs this IPL — the previous best was also scored by SRH, 72 for no loss against Kolkata Knight Riders at the same venue a week ago.

Warner escaped a run out chance while on 27 as fielder Mujeeb Ur Rahman could not gather the ball at midwicket in the fifth over.

Mujeeb clearly had a forgettable day. The off-spinner also gave away 66 runs in his four overs to be the second worst in maxium runs conceded in IPL history.

He joined Ishant Sharma who went for similar number of runs while playing for Sunrisers Hyderabad against Chennai Super Kings back in 2013. Basil Thampi holds the ignominious record though – he was thumped for 70 runs while bowling for SRH in their away match against Royal Challengers Bangalore last year.

Mujeeb was hit for 28 runs in his first two overs, including a six to David Warner and five wides down the leg side before conceding 26 in the 18th over that contained three sixes and a boundary.

Captain Ravichandran Ashwin brought himself into the attack in the sixth over and Warner smacked him out of the ground first ball. Later, the bowler stopped in his tracks before delivery twice during the over, evoking boos from the crowd possibly peeved at his Mankading of Rajasthan Royals’ Jos Buttler early on in the tournament.

However, the introduction of another Ashwin — Murugan — got Punjab their first wicket, Saha snapped up by debutant wicketkeeper Prabhsimran Singh as he tried to pull. Sun 78 for 1 in the seventh over.

Next man Manish Pandey gelled well with Warner and continued the run feast as they scored at a brisk pace. But both fell in the 16th over, to Ashwin. Another double strike by Mohammed Shami to claim captain Kane Williamson and Mohammad Nabi in the 19th over pegged the hosts back a bit.