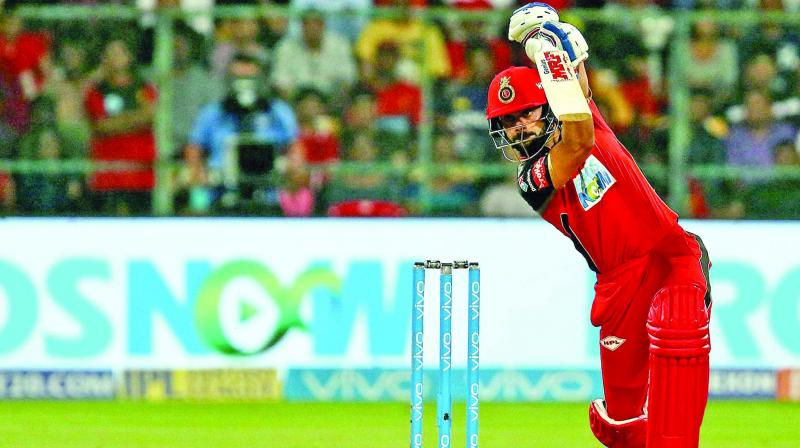 Bengaluru: Skipper Virat Kohli was once again the stand-out performer with an unbeaten 44-ball-68 as Royal Challengers Bengaluru managed a below-par 175/4 against Kolkata Knight Riders in an IPL encounter, here on Sunday.

It was a patchy batting performance from the home team and Indian captain's fourth half-century of the season ensured that they had some kind of a total on board.

Kohli's innings comprised of five fours and three sixes while Brendon McCullum contributed 38 off 28 balls. Two of the three sixes struck by Kohli were pure delight. Both were hit off Andre Russell. With minimum backlift, Kohli whipped one on the blockhole into the long-on stands while the other was a flick into the deep mid-wicket stand.

The final six came off the last delivery of the innings as he dispatched one into the mid-wicket stands. RCB’s first 10 overs weren’t as productive as they lost three wickets for 75 runs. It was primarily due to Kohli that they managed another 100 runs in the back-10.

The slow start by RCB was one of the reasons for not getting the par-score of 200 as the Powerplay overs produced only 40 runs. Put into bat, openers McCullum and Quinton de Kock (29 off 27 balls) put on 67 runs but consumed eight overs in the process.

The South African 'keeper-batsman was scalped by Kuldeep Yadav with his first ball after the strategic break. De Kock's inside out lofted shot was pouched in the deep by Shubman Gill. RCB lost next two back-to-back wickets in the 10th over when McCullum was caught off Russell and Manan Vohra (0) made a hash of a low full-toss.