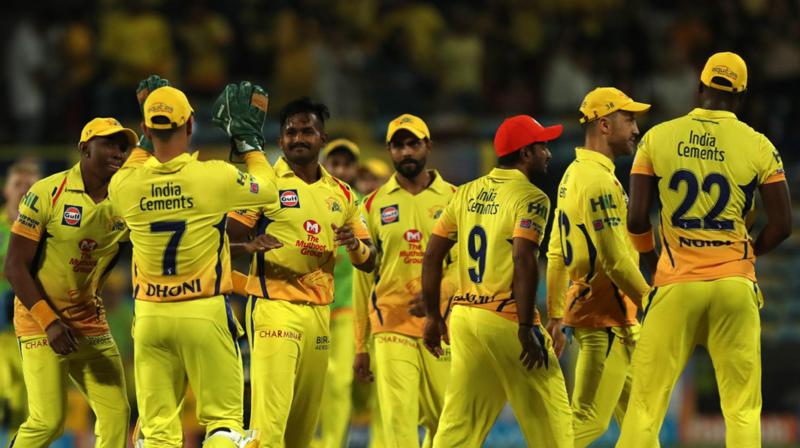 Pune: Rishabh Pant, Vijay Shankar’s effort with the bat ended up in a losing cause as Chennai Super Kings (CSK) cruised to a 13-run win against Delhi Daredevils (DD) at the MCA Stadium in Pune on Monday.

Batting first, CSK posted a mammoth 211-4 on board thanks to knocks from Shane Watson, Ambati Rayudu and MS Dhoni. And the target proved to be too much for the visitors as the Yellow Brigade got back to winning ways.

However, Rishabh Pant and Vijay Shankar later on struck an 88-run partnership to keep their side in the hunt, but the men in yellow bounced back.

Lungi Ngidi dismissed the southpaw but Vijay Shankar wasn’t done yet. The all-rounder brought his side back in the game with some crucial hitting but in the end the task was beyond their reach.

WICKET! Pant's blazing knock comes to and end and Lungi Ngidi claims his first IPL wicket. Short delivery and Pant swings his bat, gets a top edge which is taken by Jadeja.

BOWLED! Fast one off the deck. Maxwell misses and Jadeja hits.

RUN OUT! Iyer pushes one towards cover, makes the run but there is horrible miscommunication with Pant at the other end. Fails to get back in time and Dhoni does the rest.

CAUGHT! Short one, coming into the batsman and Munro swings hard only to find Karn Sharma at deep mid-wicket.

WICKET! Banged in short, Prithvi Shaw plays across the line but mistimes his shot. Hands a dolly to Jadeja at mid-on.

1st innings: Chennai Super Kings (CSK) posted a massive 206-5 on board after a collective batting performance against Delhi Daredevils (DD) at the MCA Stadium in Pune on Monday.

Shane Watson and Faf du Plessis got off to a cracking start with a hundred run stand before Vijay Shankar broke the partnership by dismissing the latter. Suresh Raina couldn’t contribute much as he departed for a duck.

Watson, as he did from the start, continued his fine run with some boundaries but his fiery knock came to an end by Amit Mishra.

But after his departure, MS Dhoni and Ambati Rayudu took charge of things to ensure the hosts put on a satisfactory total.

RUN OUT! What happened there? A horrible mix-up as Rayudu wants a run but Dhoni stays calm in his crease. No co-ordination whatsoever and the Hyderabad batsman has to sacrifice his wicket.

CAUGHT IN THE DEEP! Mishra gets the big fish. Watson's fine knock comes to an end. The Australian aims for another biggie but holes out one to Liam Plunkett at deep extra cover.

FOXED! Raina has to walk back for a duck. Round the wicket from Maxwell, pitching outside off and the batsman misses his swing as the ball skids on straight to the stumps.

WICKET! Vijay Shankar draws first blood for DD. Full and wide outside off stump. Du Plessis hit it hard but doesn't make the desired contact. Finds the man at long off.

FIFTY PARTNERSHIP! Just the start MS Dhoni and co needed. Delhi Daredevils are having no answers to stop the pair of Watson and du Plessis.

Preview: Delhi Daredevils’s (DD) will hope their fortunes under new captain Shreyas Iyer continues to bear fruits as they take on Chennai Super Kings (CSK) at the MCA Cricket Stadium in Pune on Monday.

DD was undergoing a dismal campaign that also saw Gautam Gambhir give up his captaincy. However, Iyer shouldered the responsibility with aplomb as he kept the visitors in the hunt for the 2018 Indian Premier League (IPL) title in the previous match against the Kolkata Knight Riders.

The hosts, playing on their adopted home venue in Pune will meanwhile look to find their feet once again after losing to the Mumbai Indians by eight wickets on Saturday.

MS Dhoni-led CSK are placed on the second spot in the IPL table and cannot afford a slip up here with teams fighting it hard to occupy the play-offs spot. Will CSK’s experienced side deliver the goods again or will DD present a surprise?

.@DelhiDaredevils Captain Shreyas Iyer calls it right at the toss and elects to bowl first against the @ChennaiIPL.#CSKvDD #VIVOIPL pic.twitter.com/O2w9bsdlL3

Delhi Daredevils have won the toss and elected to field. Here's the playing XI for both teams -

The match will take place at the MCA Stadium in Pune.