The visitors managed just three boundaries in the power play overs of the first six. 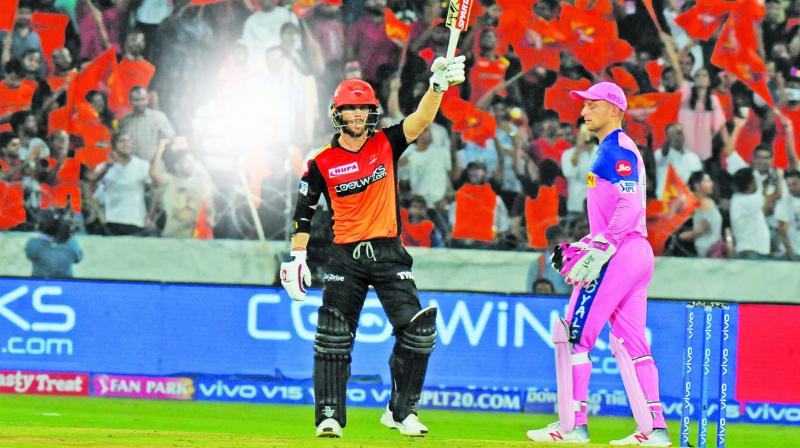 Hyderabad: Comeback man David Warner smashed a second successive half-century and laid a solid platform along with his opening partner Jonny Bairstow as Sunrisers Hyderabad registered their first win of this IPL, over the visiting Rajasthan Royals on Friday night.

Warner (69 off 37 balls, 9x4, 2x6) and Bairstow (45 in 28 balls, 6x4, 1x6) got the hosts off to a flier by rattling 110 in 9.4 overs — their second straight century partnership — before falling in quick succession. But No.4 Vijay Shankar’s 35 and a sweet 16 by Yusuf Pathan meant the hosts hopped over the Royals’ 198 for 2, built over the season’s first century by Sanju Samson, a fine 70 by captain Ajinkya Rahane and their phenomenal partnership of 119 for the second wicket.

Samson made an unbeaten 102 off 55 balls with the help of 10 fours and four sixes while Rahane’s 49-ball knock was embellished with four fours and three sixes.

Earlier, the Sunrisers started well but lost their way gradually. Captain Kane Williamson introduced mystery spinner Rashid Khan in the fourth over and he struck with his second ball.

The dangerous Jos Buttler saw his stumps shattered as he tried to sweep the Afghan — Royals 15 for 1. It would’ve been worse next ball had Samson’s leading edge not flown wide of a diving David Warner at slip. The visitors managed just three boundaries in the power play overs of the first six. Soon, Samson slammed left-arm spinner Shahbaaz Nadeem into the western stands for the first six of the match. He then carted Siddharth Kaul over midwicket for the second maximum to provide impetus to the innings.

Rahane too stepped up to the plate to pack some power as the two took the Royals to 75 without any further loss midway through the innings.

Kane Williamson kept shuffling his bowling pack frequently in search of another ace but to no avail.Rahane welcomed Vijay Shankar with a flick that flew into the spectators. One more boundary from Sanju, a crashing cover drive, and the Royals were cruising indeed. Such was the confidence that Rahane reverse hit Rashid Khan for four. With five overs to go, the Royals were sitting pretty at 122 for 1, ready to launch into beast mode. And they did.

Rahane sent Nadeem over the covers for a six, scooped him over the wicketkeeper for a boundary and then fell holing out to Manish Pandey at long-on while trying to force the pace.

Samson was dropped on 58 by Bairstow who barely managed to get his gloves to a skier after running all the way to the square leg region in the 17th over.