Play was not stopped as Bennett played a defensive shot to mid-off, and then hit the next ball to the boundary 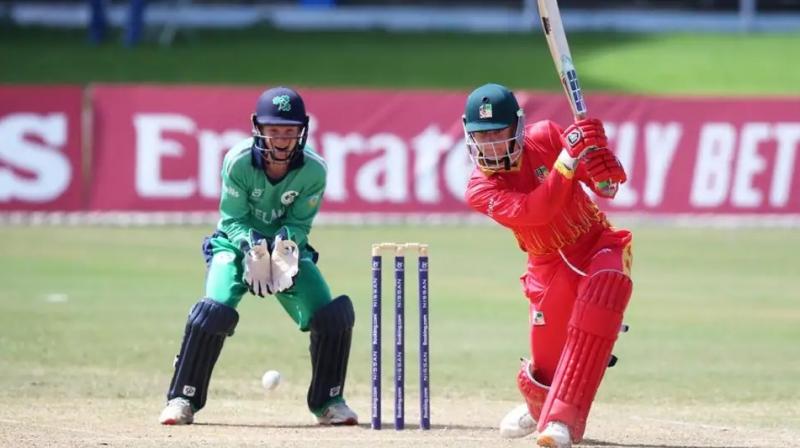 While the players were unaware and continued the action on the field, the commentators could feel the tremors as the commentary box began shaking. (Twitter Photo)

Port of Spain: Live visuals of the ICC U-19 World Cup match between Ireland and Zimbabwe shook vigorously for few seconds as an earthquake off the coast of Port of Spain sent mild tremors through the Queen's Park Oval here.

While the players were unaware and continued the action on the field, the commentators could feel the tremors as the commentary box began shaking.

The earthquake was measured at 5.2 magnitude on the richter scale.

Commentator Andrew Leonard described the tremors as the commentary box began to wobble.

The tremors were said to have lasted for 15-20 seconds.

Ireland spinner Matthew Humphreys was bowling the fifth ball of the sixth over to Zimbabwe's Brian Bennett when the front-on camera showing the action began to shake.

Play was not stopped as Bennett played a defensive shot to mid-off, and then hit the next ball to the boundary.

"A 5.2 magnitude earthquake struck near Trinidad and Tobago on Saturday morning. According to the UWI Seismic Research Centre, the quake occurred around 9:40am at a depth of 10km," a report in Loop News website said.

The two teams were competing for positions 9-12 at the World Cup in the Plate league, after finishing third in their respective groups.

Riding half centuries by opener Jack Dickson (78) and skipper Tim Tector (76 not out) after pacer Muzamil Sherzad's excellent 5/20, Ireland emerged winners by five wickets chasing a target of 167.

An Ireland Cricket release on the match said, "Sherzad, though, wasn't the only thing that struck at the Queens Park Oval today, with a 5.1 magnitude earthquake shaking the ground mid-way through the Zimbabwe innings.

"The commentary team, which featured Irishman Andrew Leonard, bravely continued commentating with good humour as an assessment was made of any potential damage to the historic ground that has stood on the site since 1896."