From being 39 for two, New Zealand reached the end of the second session on day one at 173 for three. 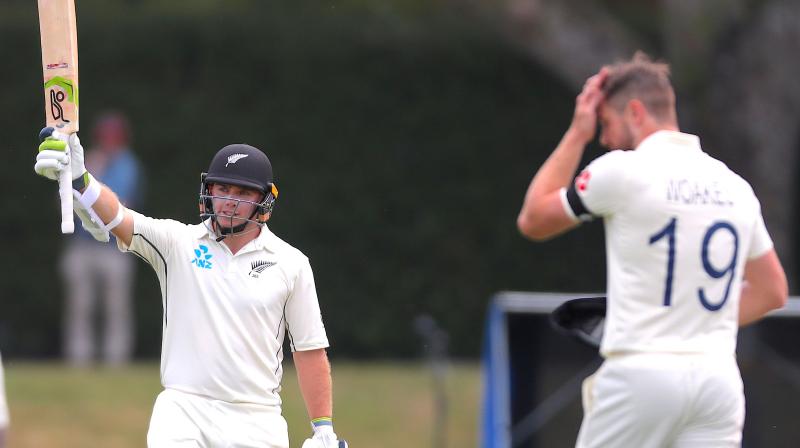 An unbeaten century to Tom Latham and support from Ross Taylor steered New Zealand to a solid position after a rocky start to the second Test in Hamilton on Friday. (Photo:AFP)

Hamilton: An unbeaten century to Tom Latham and support from Ross Taylor steered New Zealand to a solid position after a rocky start to the second Test in Hamilton on Friday.

From being 39 for two, New Zealand reached the end of the second session on day one at 173 for three after Latham and Taylor both received let-offs which proved costly for England.

Latham brought up his 11th Test century driving Joe Root to the boundary in the last over before the interval to end the session on 101.

He had been dropped on 62 when an edge flew through the hands of Ben Stokes at second slip and went through to the boundary.

Taylor, eventually dismissed for 52, had his anxious moment on 25 when he was rapped on the pads by Stuart Broad and given out.

After conferring with Latham, Taylor appeared to believe there was a ball direction issue and sought a review.

TV umpire Bruce Oxenford, however, overturned the decision because unbeknown to the batsman there was a faint edge, which was picked up by the snickometer.

A relieved Taylor batted on to bring up his 32nd Test half-century with a four off Chris Woakes but was out next ball, caught at first slip by Joe Root.

Root's safe hands and first slip had accounted for all three wickets after he won the toss and put New Zealand in to bat on a wicket that traditionally favours bowling first.

But after the cheap wickets of Jeet Raval for five and Kane Williamson for four it was the batting of Latham and Taylor in a 116-run stand that dominated for nearly 34 overs until Taylor's dismissal.

Woakes, brought in to give England five seamers at the expense of spinner Jack Leach, had figures of two for 41 while Stuart Broad had one for 33.