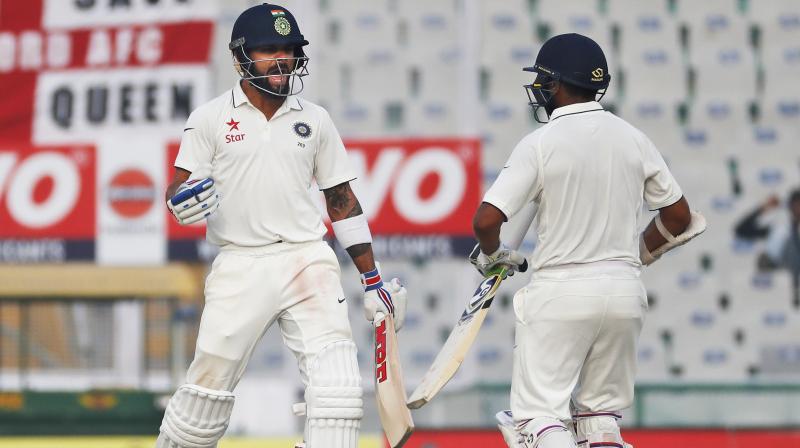 Parthiv Patel (67 not out) and Virat Kohli (6 not out) celebrate after India thumped England by 8 wickets to win the Mohali Test and take 2-0 lead in the five-match Test series. (Photo: AP)

Mohali: Ravindra Jadeja's sparkling all-round performance floored England and handed India an unbeatable 2-0 series after they cantered home to a comprehensive eight-wicket win in the third Test on Tuesday.

Top-ranked India surpassed the 103-run target in the final session of the fourth day at Mohali with recalled opener Parthiv Patel (67 not out) hitting the winning runs.

England seamer Chris Woakes had struck early to send back opener Murali Vijay for nought but the wicket was just a small glitch on India's road to victory.

Patel and Cheteshwar Pujara (25) then put on an 81-run partnership to enable the hosts register their second straight win of the five-match series.

The first Test in Rajkot ended in a draw before India won the Visakhapatnam game by 246 runs.

Patel, returning to the Test side after an eight-year gap, struck 11 fours and a six off 54 balls on way to his fifth Test half-century.

Skipper Virat Kohli, who was at the other end when stumps were drawn, hugged Patel to celebrate his team's well-earned victory.

It was the steely lower-order resistance from the Indian batsmen and a combined effort by their bowlers that set up victory for the Kohli-led side.

Left-handed Jadeja scored a career-best 90 in India's 417-run first innings total before finishing with a match haul of four wickets.

Jadeja's knock surpassed his previous-best of 68 he made against the same opposition at Lord's in 2014.

The Indian lower-order contributed 213 runs to the total score after the hosts were reduced to 204-6 following a fightback by the England bowlers on the second day.

After securing a crucial 134-run first innings lead, India bowled out England for 236 despite defiant half-centuries from Joe Root (78) and Haseeb Hameed (59 not out).

Teenage Hameed, who impressed on debut with a 82-run knock in the drawn first Test in Rajkot, registered his second Test fifty in only his third game.

But the Indian bowlers always held the upper hand with paceman Mohammed Shami (5-103) instrumental in wiping off the tail in both the innings with his lively pace.

One of his bouncers even struck Woakes' helmet grille, breaking a portion of the protective gear, before getting the batsman out off the next ball.

England though can take positives from Ben Stokes' five-wicket haul in India's first innings, while leg-spinner Adil Rashid finished as the leading wicket-taker with 17 scalps.

The Alastair Cook-led side might still rue the fact that they let go of the advantage of winning the toss as they ended up scoring a below-par 283.

Stokes, who was reprimanded for his argument with Kohli on the opening day, added spice to the proceedings with a sealed lip gesture after the Indian skipper's dismissal.

Kohli reciprocated in equal measure when he put a finger on his lips after Stokes lost his wicket in England's second essay.

The action now shifts to Mumbai with the fourth Test scheduled to start on December 8.