Ashton Agar is working hard to be a T20I finisher: Aaron Finch

Left-arm spinner Agar, who has averaged 13.66 with the bat from 16 T20Is, was named at seven in the series-opener against Sri Lanka. 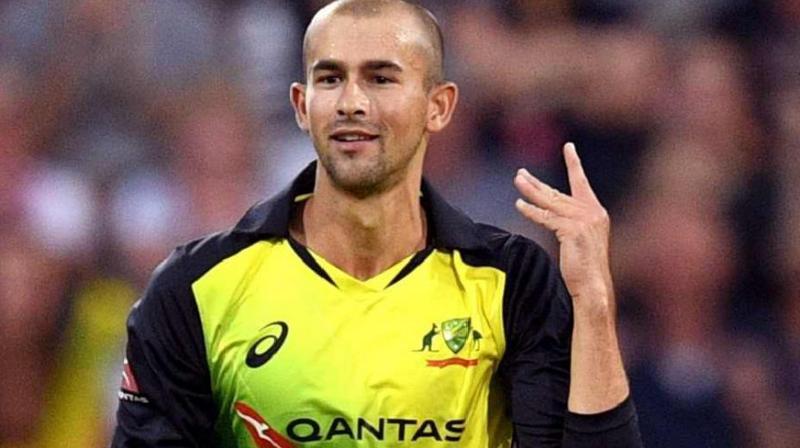 Melbourne: Australia captain Aaron Finch is hoping spin bowler Ashton Agar can blossom into a swashbuckling 'finisher' in the batting lineup to give the team more flexibility ahead of next year’s T20 World Cup. (Photo:AFP)

Melbourne: Australia captain Aaron Finch is hoping spin bowler Ashton Agar can blossom into a swashbuckling 'finisher' in the batting lineup to give the team more flexibility ahead of next year’s T20 World Cup.

Left-arm spinner Agar, who has averaged 13.66 with the bat from 16 T20Is, was named at seven in the batting order in the series-opener against Sri Lanka on Sunday but went unused as Australia’s top order dominated in the 134-run victory.

While Agar is some way short of all-rounder status, Finch said the 26-year-old was working hard to get there.

“Something that he’s been working on is becoming that real finisher towards the back end of an innings in T20 and in one-day games.

“So if he can keep developing that, it’ll give you a lot of options to play that second spinner or go with four quicks, or if there’s another all-rounder that comes in.”

On Sunday, hard-hitting all-rounder Glenn Maxwell was sent in ahead of number three Steve Smith and smashed 62 off 28 balls after David Warner (100 not out) and Finch (64) set up a 122-run opening partnership.

The captain’s call denied former skipper Smith a chance to bat in his first full international on home soil since serving a 12-month ball-tampering ban.

Finch said he wanted his batsmen to be ready to play anywhere in the order according to match situations, to make the team more competitive when they host the T20 World Cup.

“I think at all times, you’ll see four or five guys in the sheds with their pads on,” said Finch.

“To be really flexible as a middle order, prepared to go in at any stage, is important to catch teams off guard.

“If you’ve got left and right-hand combinations, there’s a few options there, so it’s a nicely balanced side at the moment.”

With the T20 World Cup the only major piece of silverware missing in Australia’s bursting trophy cabinet, Cricket Australia have scheduled a glut of T20 matches to help the world’s fifth-ranked team build.

“It’s a really great time to be playing T20 cricket for Australia because you’re getting enough game time to start to develop that squad mentality,” said Finch.

“Now we’ve got a specific date in mind, which is the start of the World Cup, to really build that 12-month foundation of a really solid T20 side that can beat the best and sustain that for a long period of time.”

Australia will look to take an unassailable 2-0 lead in the three-match T20 series against Sri Lanka at the Gabba on Wednesday.