Sri Lankan batsman easily chased down the below-par target of 239. 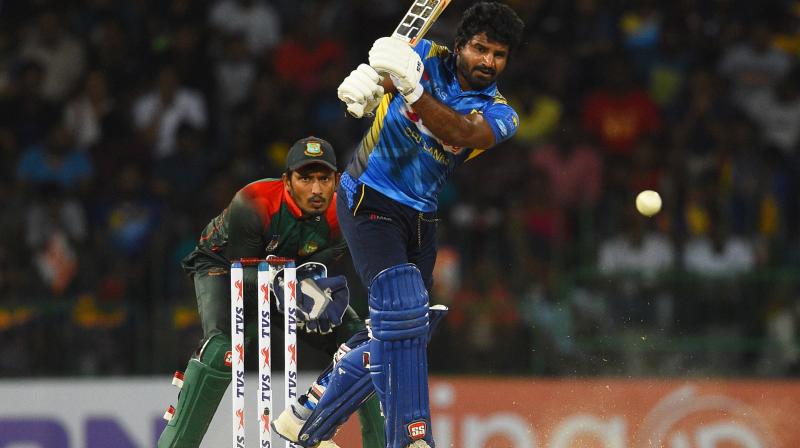 Kusal Perera and Avishka Fernando stitched a partnership of 58-runs and helped their side to go past the three-figure mark. (Photo:AFP)

Colombo: Sri Lanka sealed the three-match ODI series by 2-0 after defeating Bangladesh by seven wickets in the second game here at PR Stadium on Sunday.

Sri Lankan batsman easily chased down the below-par target of 239. Skipper Dimuth Karunaratne and Avishka Fernando built a stand of 71-runs for the first wicket.

Karunaratne (15) became a victim of Mustafizur Rahman in the 12th over. Kusal Perera and Avishka Fernando stitched a partnership of 58-runs and helped their side to go past the three-figure mark.

Perara (30) was caught by Soumya Sarka at short cover off Rahman in the 25th over. At the fall of Perera's wicket, Sri Lanka were at a comfortable position with a score of 146/3.

Angelo Mathews (44) and Kusal Mendis (41) played an unbeaten knock to get their team over the line in the 45th over.

For Bangladesh, none of their bowlers looked impressive in the match except Rahman who scalped two wickets.

Sarkar (11) was caught in front of wickets by pacer Nuwan Pradeep in the sixth over.

Mohammad Mithun joined Iqbal in middle but he departed after scoring 19 runs in the ninth over. Iqbal (19) was dismissed by Isuru Udana's ball which got a thick inside edge back and to the stumps.

Mushfiqur Rahim came in to at number four and built a partnership of 21-runs with Mithun (12) before the latter was departed by spinner Akila Dhananjay in 15th over.

Rahim held the one end strong and Mehidy Hasan helped him to get past team's score 200. Hasan and Rahim together stitched a partnership of 84-runs. Hasan was caught by Dimuth Karunaratne off Pradeep's delivery at mid-off in 46th over.

Rahim remained not out for his side and guided the team to reach a score of 238 after the end of 50-overs.

For Sri Lanka, Pradeep, Isuru Udana, and Dhananjaya scalped two wickets each in their limited 10-over quota.

The last ODI between Sri Lanka and Bangladesh will be held at PR Stadium on July 31.