Sports   Cricket  29 Jul 2019  'I will be in middle of field playing cricket': Harmanpreet Kaur on life after game
Sports, Cricket

'I will be in middle of field playing cricket': Harmanpreet Kaur on life after game

Kaur admitted that India was hungry for the 2018 World T20 title and cited the team's consistency built over months before the tournament. 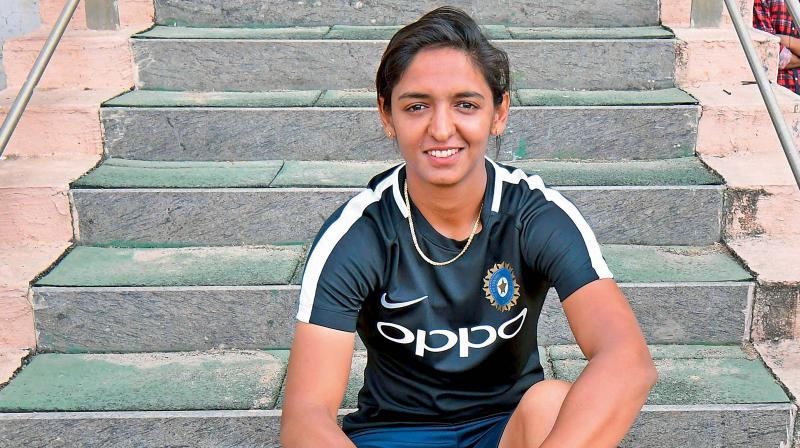 For India T20I captain Harmanpreet Kaur, an attacking batswoman who aimed to emulate Virender Sehwag, thinking anything beyond cricket brings her back to the middle of the field. (Photo: File)

Patiala: Life is bigger than sports as the latter is bound to end in an athlete's life one day. But if the game runs in one's blood then it is difficult to look beyond.

For India T20I captain Harmanpreet Kaur, an attacking batswoman who aimed to emulate Virender Sehwag, thinking anything beyond cricket brings her back to the middle of the field.

"I have never made long term plans. So even if I am made to think anything it would just be somewhere in the middle of the field playing cricket," Kaur told ANI before leaving for the Women's Super League, also called KIA Super League, in the UK.

The journey of a cricketer is seldom free of the thought of getting away from the sport for a while -- the reasons being better known to them for they are the ones who have actually lived in that moment. The Punjab-born, too, went through a period that now has made her sure of her potential following her time spent well at the National Cricket Academy (NCA) in Bangalore.

Mithali Raj-less India was knocked out at the 2018 ICC Women's World T20 semi-final by eventual runners-up England. The eight-wicket defeat resulted in fans blaming Kaur for dropping Raj. It left the cricketing fraternity confused and triggered a war of words between Raj and former head coach Ramesh Powar. The controversy finally ended with the appointment of new head coach WV Raman.

Kaur admitted that India was hungry for the 2018 World T20 title and cited the team's consistency built over months before the tournament. With the 2020 edition scheduled to take place in Australia, the India T20I captain said the team has improved and is hoping for the best going forward.

"2018 World Cup was something we all craved for because of the form and consistency that we built as a team for the last couple of months before the tournament. We were very confident and motivated. One odd day can change everything. But all that we learned from the experience is to do better and not get disheartened. Our team has improved and we are hoping the best from the 2020 World Cup," she said.

India toured New Zealand as part of ICC Women's Championship in January this year. Kaur suffered a blip in form during the three T20Is as she managed to score only 17, 5 and 2.

After getting whitewashed in the backyard of New Zealand, India returned to host England in February-March but Kaur was forced to miss the series as she sustained an ankle injury, paving the way for Smriti Mandhana to lead the T20I team in her absence.

Thoughts of taking a break from the game crossed Kaur's mind, only to realise it was a temporary phase. She came out stronger and rediscovered her love for cricket before the start of the Women's T20 Challenge.

"The break did give me the time to think and recover from my injury. I spent more time in my rehab. Getting away from cricket for a while did cross my mind but it was not for good. It was just a temporary phase and not anything permanent. I am very headstrong and cricket has been my passion and love of this lifetime," she remarked.

Following the long feud between Raj and Kaur, the two met at the Women's T20 Challenge final. The latter's match-winning 51 guided Supernovas beat Velocity by four wickets. The tournament made an impact as it garnered the attention of 13000-plus locals who turned up for the final in Jaipur.

The tournament has the potential to bring about a change at the grassroots level as the India T20I captain noted, "WIPL has helped women's cricket is gaining popularity. If the tournament grows bigger in the coming years it will bring more opportunities for talented domestic level cricketers."

Kaur, who as a child knew that she will become an athlete, complimented ODI captain Raj, speedster Jhulan Goswami and former cricketer Anjum Chopra and said the three "make legends today".

Having played under the leadership of three, she said, "Anjum di provided me with the support that a newcomer needs in the team. She gave me the chances to showcase my talent whereas Jhulan di always gave me comfort as a friend to make decisions and improve. Mithali di has shown me how to be calm and patient on the field and take through the innings with a flow."

Powar mentioned about the need of having a mental-conditioning coach in his review of the 2018 World T20. When asked whether the team requires one, Kaur said, "Yes, I believe mental health is as important as the physical health. Having a coach can be helpful."

India had a dedicated fitness and training camp under the supervision of coach Raman at NCA in June. Considering it necessary for the team, Kaur stressed, "We had a great time. The head coach is one of the most experienced coaches and under his guidance we shall have plenty of opportunities to grow better."

Arjuna awardee Kaur has represented India in just two Tests in her decade-long career so far. With England and Australia competing in a multi-format Ashes series which include s one-off Test, she highlighted the need of having the longest format in India women's team's schedule.

"Yes (India women should play in Ashes-like format). Test matches can have a great impact on a player's performance and level of understanding as a cricketer," she said.

BCCI, for the first time ever, conducted a separate conclave for women captains and coaches in May. A number of captains expressed their desire to play multi-day cricket, a format on which the Indian cricket board is not focusing just yet as they want to follow the ICC's vision of promoting women's cricket through the limited-overs format.

Kaur became the first Indian to sign an overseas T20 contract -- Women's Big Bash League in 2016. She played for Sydney Thunders and got the exposure that enhanced her training, fitness and overall game.

Recalling her experience, she said, "I was fortunate enough to sign a contract with WBBL in 2016. It was an all-new experience playing amongst the world-class players, learning the new drills and team bonding skills."

A year later, in 2017, she signed with Lancashire Thunder for KSL. Apart from Kaur, Mandhana will return while all-rounder Deepti Sharma will debut for Western Storm. The fourth edition of the tournament will also see batswoman Jemimah Rodrigues playing for Yorkshire Diamonds in her maiden stint at the UK-based league.

"I am very excited for KSL. I really enjoy the games. I am very happy for Jemi and Deepti who will be debuting (at) the KSL this season. They will have a wonderful time. And I wish them all the luck. They both are extremely talented and will get more experience while they are there," Kaur signed off.
KSL will begin on August 6, with Thunder and Southern Vipers playing in the curtain-raiser at Aigburth, Liverpool.