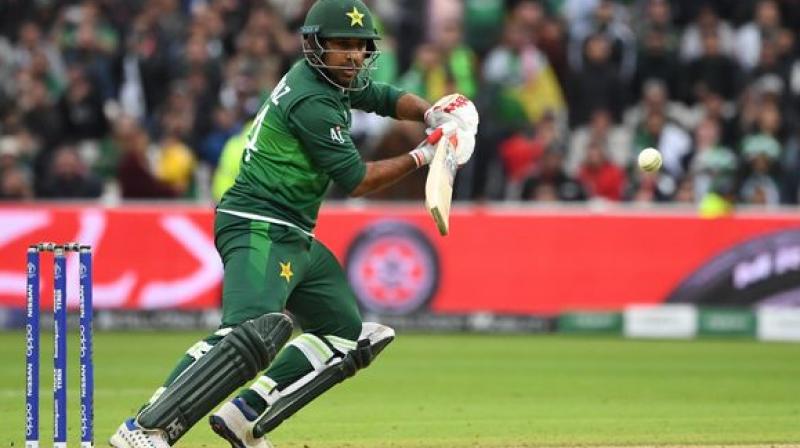 Azhar, who was part of the playing XI when under Sarfaraz's captaincy, Pakistan won the ICC Champions Trophy in 2017, is confident that Pakistan will now continue its winning ways. (Photo: AFP)

Karachi: Sarfaraz Ahmed has led the country to victory in two ICC events and possess the ability to guide Pakistan to a title win at the ongoing World Cup in England, believes Test batsman Azhar Ali.

Talking to a Pakistani cricket website, Azhar said Sarfaraz was a captain driven by a passion to see his team do well all the time.

"He is an astute and strong captain and under him, Pakistan has already won the ICC under-19 World Cup and the Champions Trophy and I think he has the ability to win another ICC title this time," he said.

Azhar, who was part of the playing XI when under Sarfaraz's captaincy, Pakistan won the ICC Champions Trophy in 2017, is confident that Pakistan will now continue its winning ways in the World Cup.

Pakistan faced a lot of criticism after losing to India but Sarfaraz's men made a comeback by registering successive wins over South Africa and New Zealand to regain hope of reaching the semifinals.

Praising the resurgence of the team in the World Cup, Azhar said it was very disappointing that when the team is not doing well everyone runs them down instead of supporting them.

"Abusing players is sad because a team needs all support the most when it is not doing well," he said.

"When a team is winning everyone is behind it but it is when your team is not doing well when you must be behind it," he said.

Azhar announced his retirement from ODIs last year after playing 53 ODIs for his country. He was also captain of the one-day squad from 2015 to 2017 before stepping down after which Sarfaraz took charge as captain in all three formats.

Azhar, a veteran of 73 Tests, also made it clear he had no regrets about retiring from ODIs last year.

"I took the correct decision because I was facing an injury problem plus after the retirements of Younis Khan and Misbah-ul-Haq I wanted to focus completely on test matches," he said.

He said he retired because he felt at that time that Fakhar Zaman and Imam-ul-Haq were ready to take his place in the ODI squad.

Azhar, who has been playing county cricket in England, said he was not surprised by the variations in the pitches offered in the World Cup which has given pace bowlers the upper hand.

"It is because of the weather conditions. The wet season lasted longer than usual at this time of the year."