The 49-year-old Kirsten earlier wrote on Twitter: “Always loved working with Team India and hopefully they find the coach most suited for their team.” 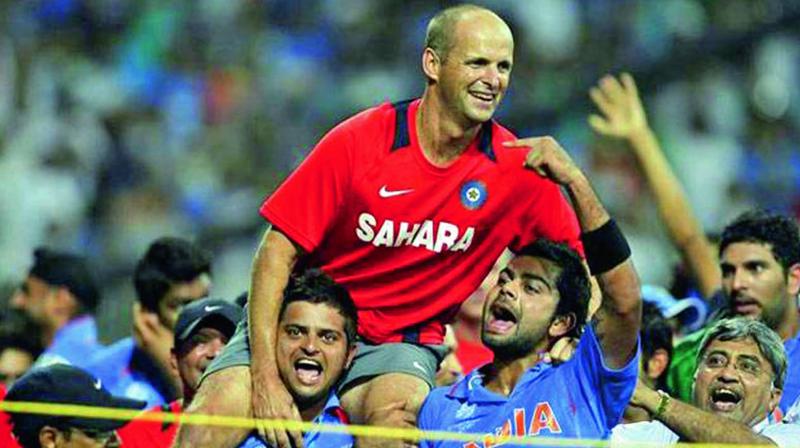 South African Gary Kirsten had a successful stint with the Indian team, guiding them to World Cup triumph in 2011.

Mumbai: Former South African batsman Gary Kirsten, who wished the Board of Control for Cricket in India luck as it gets down to appointing the next coach, has said he is not in a “position currently, to consider a full time post across all formats” after his name was linked as one of the possible choices for India’s next coach following Anil Kumble’s resignation.

“Thanks for your thoughtful consideration of my potential involvement with Indian cricket. I really did enjoy the experience,” Kirsten told India Today.

“I’m not in a position currently, to consider a full time post across all formats,” he added.

Kirsten had coached India from 2008 to 2011 and finished a successful tenure with the World Cup triumph in 2011.

In three years at the helm, Kirsten led India to series wins over Australia and England before drawing a Test series in South Africa. India had also reached on top of the Test rankings with Kirsten as coach.

Kirsten was an instant hit with the Indian team, reeling from the turbulent Greg Chappell years. The South African was respected and liked by the players and preferred to stay in the background.

The 49-year-old Kirsten earlier wrote on Twitter: “Always loved working with Team India and hopefully they find the coach most suited for their team.”

Shah in BCCI committee The BCCI on Wednesday in a surprise move decided to include former Saurashtra Cricket Association president Niranjan Shah as ‘Special Invitee’ in the newly-formed committee which will study the Lodha Panel Reforms.

What is inexplicable is Shah is 73-years old and has been running Saurashtra CA for last three decades and stands “disqualified on all counts” as per the Lodha panel reforms.

A senior BCCI official said that Shah himself wanted to be a part of the committee and there were pressure from other 70 plus disqualified officials. “Amitabh Chaudhary seems helpless as N. Srinivasan has again started calling shots. Niranjan Shah was insistent that he should be taken in the committee. Accordingly, he was included today and the number of members have now increased to eight,” a senior BCCI official said.

Something that many well-intentioned BCCI officials are unable to digest that Shah’s career in administration is finished but he doesn’t want to give up.

Tags: board of control for cricket in india, anil kumble, gary kirsten