Chasing a mammoth score of 422, New Zealand lost early wickets and they were reduced to 33 for three. 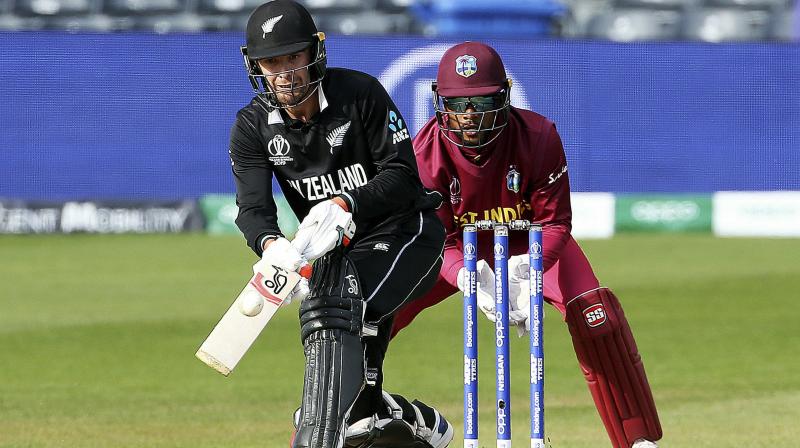 Skipper Kane Williamson and Tom Blundell stitched a 120 run partnership, before Williamson (85) was run out by Fabian Allen in the 26th over with the team still requiring 287 runs for the win. (Photo:AP)

Bristol: West Indies defeated New Zealand by 91 runs in their final warm-up match at Bristol on Tuesday ahead of the upcoming Cricket World Cup.

Chasing a mammoth score of 422, New Zealand lost early wickets and they were reduced to 33 for three. Martin Guptill (5), Henry Nicholls (15), and Ross Taylor (2) all failed to leave a mark.

Skipper Kane Williamson and Tom Blundell stitched a 120 run partnership, before Williamson (85) was run out by Fabian Allen in the 26th over with the team still requiring 287 runs for the win.

James Neesham and Blundell put up a 69-run stand before Neesham's (20) departure in the 34th over. Blundell brought up his century in 39th over.

Blundell (106) was dismissed immediately after completing his century. Despite, regular boundaries by the tailenders, the asking run-rate proved too much for the Kiwi batsmen and they finally lost the match by 91 runs.

Earlier, century by Shai Hope and half-century by Andre Russell helped West Indies to score a mammoth total of 421 after being asked to bat first.

Openers Chris Gayle and Evin Lewis gave a solid start to the Windies innings as they stitched a 59 run-partnership before Gayle (36) was dismissed in the eighth over by Trent Boult.

Shai Hope who came to bat at number three did not allow the momentum to slip away, and he along with Lewis built an 84 run stand. Lewis (50) was finally dismissed in the 18th over.

Hope was dismissed in the 36th over after playing a knock of 101 runs.
Russell and skipper Jason Holder played quickfire knocks of 54 and 47 runs respectively to take Windies past the 350-run mark. In the end, Ashley Nurse scored 21 runs off just nine balls to take the Windies score above 400.

Trent Boult took the highest number wicket for the Blackcaps as he clinched four wickets. Medium pacer Matt Henry was taken to the cleaners by the Windies batsmen as he conceded 107 runs from his nine overs.