The 29-year-old has played some crucial innings in lower middle-order and has been preparing himself in the nets. 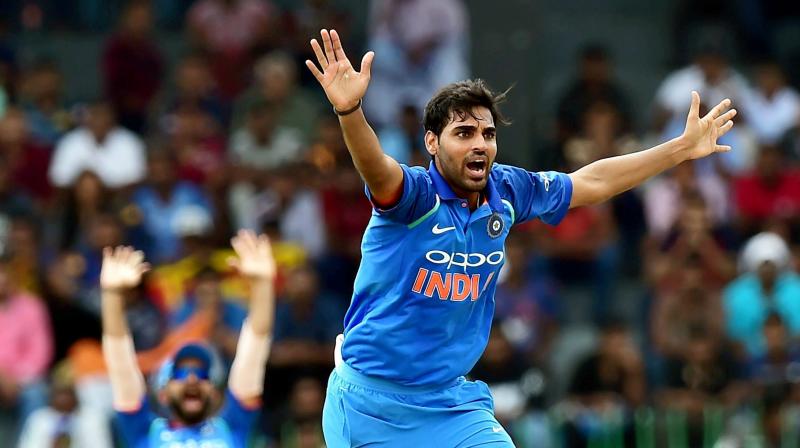 Cardiff: Bhuvneshwar Kumar admitted that one always wants to start the ICC Men's Cricket World Cup with a win, however, the fast bowler pointed out India is yet to finalise its plans for South Africa.

India and South Africa will meet on June 5 at Hampshire Bowl, Southampton.

India had defeated South Africa with a 5-1 margin when the two teams last met in early 2018. During the bilateral series, South Africa was without its key players with Faf du Plessis, AB de Villiers and Quinton de Kock all ruled out and were led by stand-in captain Aiden Markram.

"You always want to start with a win in the World Cup but right now I cannot say what we will be thinking or planning. We have almost a week. When we will practice and have meetings then we will decide what we need to do against them (South Africa) and their individual players," Bhuvneshwar said.

Having played in English conditions before, Bhuvneshwar has acclimatised himself in the two warm-up matches to figure out what he needs to do in the tournament.

India lost its first warm-up match against New Zealand by 6 wickets. But the Virat Kohli-led team bounced back and secured an emphatic 95-run win over Bangladesh in its second practice fixture.

"World cup is a big platform. Yes, the pressure will be there but I am excited and confident as I have toured here earlier. I know the England conditions. In these two warm-ups (against New Zealand and Bangladesh) I acclimatised myself to know what to do in the tournament and what conditions will be," he said.

The fast bowler further stressed that he has a lot of expectations from himself for his batting. The 29-year-old has played some crucial innings in lower middle-order and has been preparing himself in the nets.

"When it comes to batting, I have a lot of expectations from myself. I have played in some crucial matches which have boosted my confidence. I know my ability in batting. I am preparing in the nets so that if the team needs me I can step in," he said.

Bhuvneshwar along with Mohammed Shami and Jasprit Bumrah form the Indian pace unit. Being aware that the conditions in England help fast bowlers,

Bhuvneshwar noted that all three seek help from each other to work on their skills.

"We all know England conditions help fast bowlers. Our (Shami, Bumrah and Bhuvneshwar) role will be crucial. We three know as an individual what strength we have and what more we need to do which will help the team."

"We three share our experience which helps. If it will swing it will give advantage to all. But we will see how conditions turn out to be. If it does, it will be an additional boost for bowlers," he said.