Mumbai was getting closer to chasing down the target until Hardik Pandya gave away an easy catch to Russell. 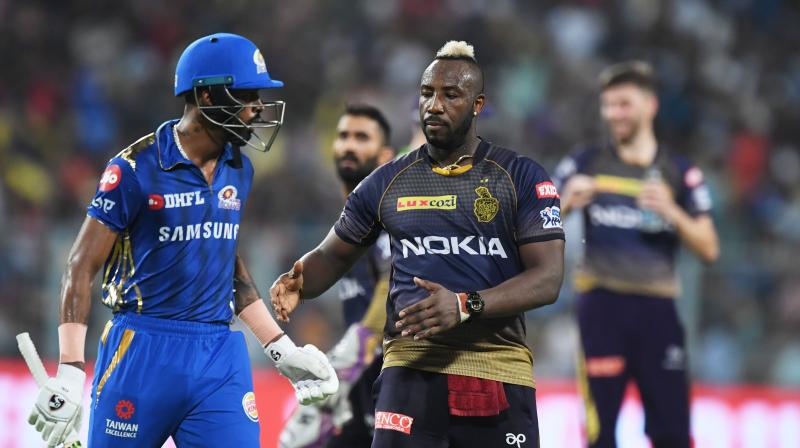 Keiron Pollard and Hardik Pandya gave their side a crucial momentum. Hardik Pandya scored the fastest half-century in this season of IPL as he scored his half-century in just 17 balls and both the players formed a 63-run partnership. After Hardik Pandya’s dismissal, Mumbai’s batting line-up crumbled and faced a 34-run defeat. (Photo: AFP)

Chasing a mammoth target of 233 runs, Mumbai had a substandard start as they lost wickets of both of their openers, Rohit Sharma and Quinton de Kock, in the first four overs.

Then Evin Lewis and Suryakumar Yadav came out to bat and formed a 20-run partnership before Lewis gave away his wicket. Soon after Lewis Yadav too followed him back to the pavilion.

Sunil Narine got hold of Pollard (20) which brought Krunal Pandya to the field. Hardik Pandya, however, kept on smashing regular boundaries and sixes and formed a 64-run partnership with Krunal Pandya,

As Mumbai was getting closer to chasing down the target, Hardik Pandya gave away an easy catch to Russell which ended his 91-run inning.

Earlier, KKR were sent to bat first and they had a brilliant start as both the openers, Shubman Gill and Chris Lynn, struck regular boundaries. Both the players stitched a 96-run partnership and gave their side an outstanding start.

Gill and Lynn both struck their half-century, scoring 76 and 54 runs respectively. Mumbai Indians bowler Rahul Chahar provided his team with their first breakthrough in the name of Lynn.

Lynn’s wicket brought KKR’s most destructive batsman Andre Russell to bat and Russell did not disappoint his side as he smashed eight maximums during his inning.

Gill formed an amazing 62-run partnership with Russell as well before the former was sent back to the pavilion by Hardik Pandya.

Then skipper Dinesh Karthik came out to bat. However, Russell stole the show in the final overs as he hammered regular boundaries. Russell scored unbeaten 80 runs off just 40 balls which propelled KKR to post the highest ever total of 232 runs in this season of IPL.

KKR will now visit Punjab to face Kings XI Punjab on May 3 while Mumbai will host Sunrisers Hyderabad on May 2.