ICC World Cup 2019, Players to watch out for: Hardik Pandya

The all-rounder has emerged as a key player for India since his debut, and is playing for Mumbai Indians in IPL 2019. 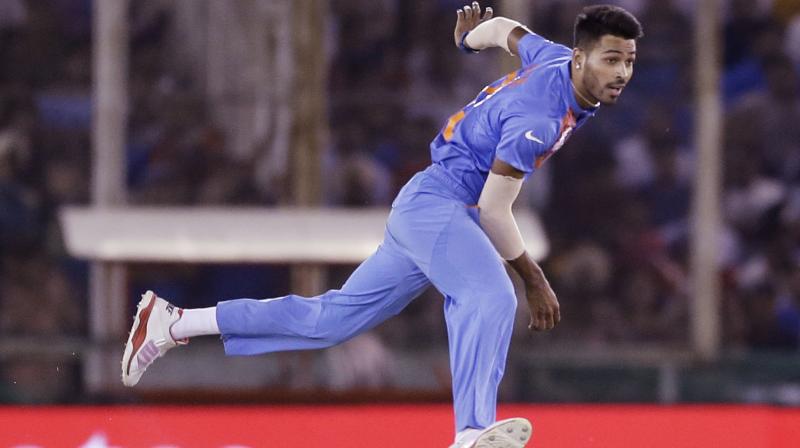 Pandya has contributed with the ball by taking 44 wickets in 44 innings with an economy of 5.53 in ODIs. (Photo: AP)

We begin from April 29 a series of the key players to watch out for in the ICC World Cup, 2019 and why. The first of them is Hardik Pandya.

Hardik Pandya -- the name was on every Mumbai Indians (MI) fan’s lips after his enthralling knock against Kolkata Knight Riders in IPL 2019 on April 29.

Pandya came to the crease when half of MI’s team was back in the pavilion while chasing a mammoth total of 232. Pandya was the lone warrior, scoring 91 runs in 34 balls, which involved 6 fours and 9 sixes.

Pandya grabbed the headlines despite MI failing to chase down the target. The innings will remain one of the most fierce of his career, especially as it came at a time when the World Cup 2019 is around the corner.

Watch Hardik Mesmerises with 34-ball 91 from VIVO IPL, 2019 on Hotstar

Hardik Pandya registered the fastest fifty of VIVO IPL 2019 as he took KKR bowlers to the cleaners with 91 off only 34 balls...

The 25-year-old from Vadodara has been selected in the Indian squad for ICC World Cup 2019. Considering the fact that England’s pitches are more favourable to seam and swing, the inclusion of Pandya will be a key aspect for India’s success in the tournament. Pandya has already proved his mettle by performing against England in the Nottingham test in August, 2018. Regarded as a T-20 specialist, Pandya showcased his temperament with the red ball as well when he delivered his career-best performance in test cricket by taking maiden five-wicket haul. He took five wickets in five overs, conceding only 28 runs in his spell.

Pandya broke into the international scenario through his performances for Mumbai Indians in IPL. He played a pivotal role in helping MI to snatch victory from the jaws of defeat against CSK in 2015. Pandya smashed 21 runs from just eight balls, helping MI to chase down the target of 158. Australian legend Ricky Ponting had heaped praises on Pandya after that short but crucial innings.

Since his IPL debut in 2015, he has paved his way to the starting line-up of MI as well as India. Pandya’s one more memorable bowling  performance was in ICC World T-20 against Bangladesh. India won the match by a single run, when Pandya restricted Bangladesh in the last over when they needed 11 runs to win.

Pandya’s innings in the Champions Trophy final against Pakistan will always remain as one of the best innings ever played by the all-rounder. When the hopes of Indian team crumpled after half the team was dismissed for 54 runs. Pandya’s quick-fire innings of 76 runs in just 43 balls rejuvinated the chase but went in vain, as he got run out due to miscommuncation with Ravindra Jadeja. Pakistan won the final by 180 runs, but Pandya’s heroic innings got appreciateed a lot.

Talking of all-rounders in the Indian squad, Hardik Pandya can be an effective fourth fast bowler option for India and he can contribute with the bat as well. The other two all-rounders can be either Kedar Jadhav or Ravindra Jadeja who are efficient on pitches where a bit of turn is available.

Jadhav has the X-factor of bowling off-breaks with a round arm action and left arm orthodox spinners like Jadeja can always be handy against right handed batsmen. Hence, the only adversary of Hardik Pandya with whom he will be fighting for a seam all-rounder spot is Vijay Shankar.

Both the players have the capability to shine in the World Cup, but Pandya’s trait of finishing the game with his powerful strike rate will be an added advantage for him.

Pandya has scored 731 runs in 29 innings in ODI at an average of 29.2. He has also contributed with the ball by taking 44 wickets in 44 innings with an economy of 5.53. Compared with the Indian legend Kapil Dev, Pandya still has a long way to go in order achieve that stature.