Fresh from his match-winning 87 against Rising Pune Supergiant, Uthappa began from where he had left in Pune. 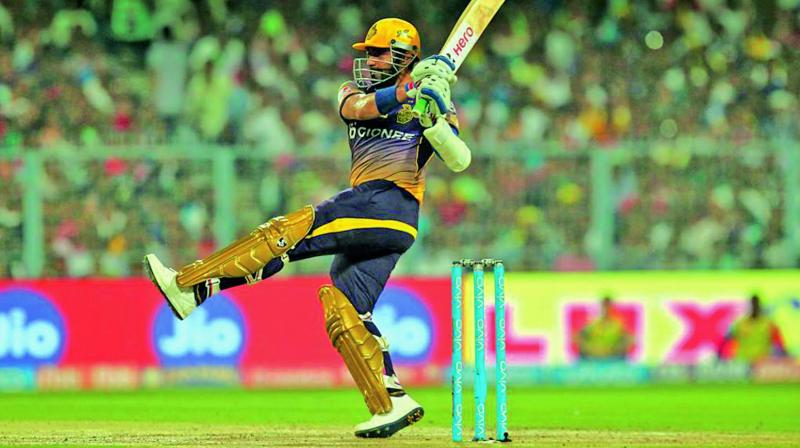 Robin Uthappa continued his purple patch with a whirlwind knock of 59. (Photo: BCCI)

Kolkata: Kolkata Knight Riders skipper Gautam Gambhir and Robin Uthappa’s pyrotechnics with the bat handed Delhi Daredevils a seven-wicket defeat and pushed them on the verge of elimination in the Indian Premier League.

This was Delhi’s fourth loss on the trot.

After Uthappa was run out, Gambhir held fort and led the team from the front with an unbeaten 71 from 52 balls (11x4) to complete the chase with 22 balls to spare. He also completed 6,000 runs in T20 cricket.

This was their fourth century partnership while chasing in the IPL — the most by any pair going past David Warner and Shikhar Dhawan’s three. KKR haven’t lost while chasing at Eden Gardens since IPL 2012.

KKR (14 points) have one foot in the playoff with seven wins from nine matches, while DD’s campaign is all but over following a four-match losing streak to languish at the bottom of the table with four points from seven matches.

If Delhi batsmen made a mess of their spectacular start, their fielders added to their woes as Gambhir and Uthappa went about their chase in a professional manner.

Uthappa made full use of a reprieve on nine and he overcame a niggle on his left leg to lead the charge, smashing a 24-ball half-century, his fourth from nine games this season.

Three Delhi fielders — Amit Mishra, Sanju Samson and wicketkeeper Rishabh Pant — rushed to take an Uthappa skier in between short fine leg and square leg but in the end no one went for the catch.

Fresh from his match-winning 87 against Rising Pune Supergiant, Uthappa began from where he had left in Pune.

He was at his furious best against Chris Morris and hammered him for 6, 4, 6 in an exceptional show of might. In the next over he hit Pat Cummins for a six and a four.

Making a comeback in place of Darren Bravo, Nathan Coulter-Nile (3/34) led a KKR fightback to restrict Delhi Daredevils to a below-par 160/6 after they were 41 without loss in four overs.

Coulter-Nile has now picked two or more wickets in each of the four games this season.

Kolkata Knight Riders found the going tough after a flying start, but their bowlers put up a tidy show to restrict Delhi Daredevils.

Put in to bat, Delhi were 41/0  from four overs, but Sunil Narine’s first-over breakthrough stymied their run- flow before Nathan Coulter-Nile produced some excellent bowling.