Pooja who showed her bowling talent and hitting ability at CCI is regarded as promising youngster in the Indian team alongwith Jemimah. 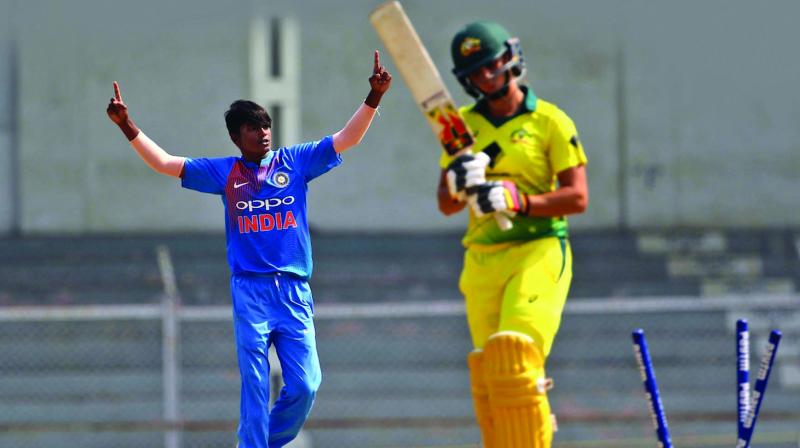 The Madhya Pradesh cricketer who has played for her state in Mumbai before and attended training camps here, is a good fielder also. (Photo: BCCI)

Three talented teenagers made debut in Indian women’s tour to South Africa recently and Pooja Vastrakar was one amongst them. The 18-year-old allrounder is full of promise along with Jemimah Rodrigues and Taniya Bhatia who were the other two to make their international debuts in South Africa.

The three are keenly looked upon by the team management and are getting full support from the senior team members and support staff. “We compliment each other well and tell ourselves that we have to do well in every match. Seniors are very supportive, they behave normally to us, we don’t feel like newcomers,” she said.

“Captain (Harmanpreet Kaur) talks to me consistently and consoles when I get hit for a boundary. Jhulan Goswami comes all the way from fine-leg to tell me how to deal in certain situations and with Mithali (Raj) I share the room. It has been great going,” she said.

The Bilaspur girl—with a kar at the end of her surname which is more prevailent in Mumbai men’s cricket from decades—made her T20I debut in South Africa and went on to make ODI debut against Australia in Baroda. She made first international 50 there and impressed with the ball. The talented seamer can bowl bouncers, swing the ball both ways. “I started as a batswoman, but later I was picked in Madhya Pradesh team as a bowler. So I developed more interest in bowling. I have more control over length balls, I want to improve fuller length deliveries and get my yorkers right consistently,” said the Indian women team’s seaming allrounder.

After showing promise in the T20I series in South Africa and following it up during the ODI series in Baroda, she didn’t play the first game of the Tri series at Cricket Club of India to the surprise of many. But she was included for the second match and shared the ball with senior pro Jhulan Goswami. With the bat earlier she played a cameo of unbeaten 22 to bolster India score to 198 which England chased mainly due to Danielle Wyatt’s 124.

The seamer snared two early wickets in her second match against Australia on Monday but Australia recovered to post 186. When she came to bat, the outcome was evident in favour of Aussies but she gave respectability to score with unbeaten 19 and shared 53-run undefeated partnership for the sixth wicket with senior allrounder Anuja Patil (38 not out). Her inside out shots and ability to clear field with ease impressed the onlookers. Besides her bowling variations she is also a big hitting option for the team along with skipper Harmanpreet Kaur and Veda Krishnamurthy.

“Anuja told me to play till the end and look for gaps. Earlier,  I faced few problems of playing shots against left arm medium pacers. But now I have worked on my shots and I enjoyed batting with her,” she said.

The Madhya Pradesh cricketer who has played for her state in Mumbai before and attended training camps here, is a good fielder also.

Youngest of seven siblings—five sisters and two brothers—and daughter to a retired BSNL employee, she lost mother at ten and has moved ahead despite emotional setback. Injury problems have plagued her short career so far and she was carrying injury in the Women’s Challenger Trophy while representing Smriti Mandhana led India Blue’s earlier this year. But through her resilience she recovered in time to get picked for her maiden international tour to South Africa and is already raising eyebrows with her performances at the big stage.