Kulkarni and Kothari pick four wickets each to bowl out Tripura for 288. Mumbai, led by Shaw’s breezy 26-ball fifty, chased 63 in 6.2 overs. 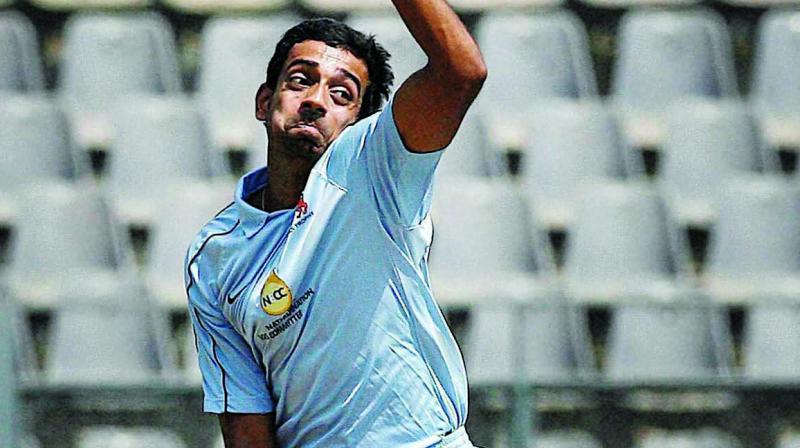 Tripura’s most experienced batsmen Yashpal Singh and Smit Patel delayed the inevitable but Mumbai bowled out the visitors for 288 in 78 overs and then chased 63 in 6.2 overs in a Group C Ranji Trophy match at Wankhede stadium on Monday.

Dhawal Kulkarni (4/69) and Karsh Kothari (4/72) bagged eight wickets between them on a flat wicket to set up Mumbai’s win. Kulkarni finished with a match haul of seven wickets and also scored an unbeaten fifty in the match.

The Aditya Tare-led side qualified for the quarter-finals after getting seven points from the match. They currently top their group with 21 points. Openers Prithvi Shaw and Jay Bista ensured they got a bonus point by not losing any wicket in the chase. It was Mumbai’s only second win of the season and the first at home. Shaw was in a hurry and went after the bowlers from ball one to score his fifty in just 26 balls with eight boundaries. Bista finished with an upper-cut four, remaining unbeaten on 13.

Earlier, Yashpal slammed 82 in 127 balls during his 166 minute-stay at the crease to frustate Mumbai, who were a bowler short. Shardul Thakur, who injured his left shoulder in the first innings while attempting a high catch, may require more than a week for full recovery. Former Services mainstay Yashpal struck 12 fours in his authoritative knock.

Wicket-keeper batsman Patel scored 68 in 111 balls with 10 boundaries and the duo shared a 129-run partnership for the fourth wicket to make Mumbai bowlers toil, especially in the second session.

The hosts, after declaring at the overnight score of 421/8, got an early wicket but Bishal Ghosh (38) denied Mumbai in the first session with a 65-run partnership for the second wicket with Udiyan Bose (34). Dhawal Kulkarni dismissed Bose to pick his second wicket of the session.

Akash Parkar cleaned up Ghosh second ball after lunch to give Mumbai a sniff but Patel and Yashpal kept Mumbai at bay, punishing a spineless Mumbai bowling. Patel crossed 2,000 first-class runs during the innings. The pitch, which saw 13 wickets fall on the first day, had eased out and only four wickets fell on the second day. On the third day also Yashpal and Patel were at ease with bowlers hardling troubling them until Yashpal on 49 gave a tough caught and bowled chance to Bista in his first over but he failed to grab it. The duo completed their respective fifties and raised their 100-run partnership in 118 balls with Patel’s boundary.

Bista got the much-needed breakthrough when he went through Patel’s defense to dislodge his bails and he apparently was given a send off not to his liking. Bista was wayward an over earlier but skipper Tare persisted with him, which worked. Karsh Kothari removed new batsman Gurinder Singh (1) at the stroke of tea by having him caught at slip by Suryakumar Yadav as Tripura were 222/5 at tea, still trailing by four runs. Kothari dismissed Tripura skipper Manisankar Murasingh in similar fashion the first ball after tea to open the flood gates.

Yashpal stepped out too early as Kothari bowled smartly to deceive him and Tare whipped the bails off in a flash to end the breezy stand of 38 in 31 balls. Kulkarni bagged the last two wickets in a hurry.