In an unbeaten 55 off 24 balls, taking the score past 200-run mark, his innings had four sixes and as many boundaries. 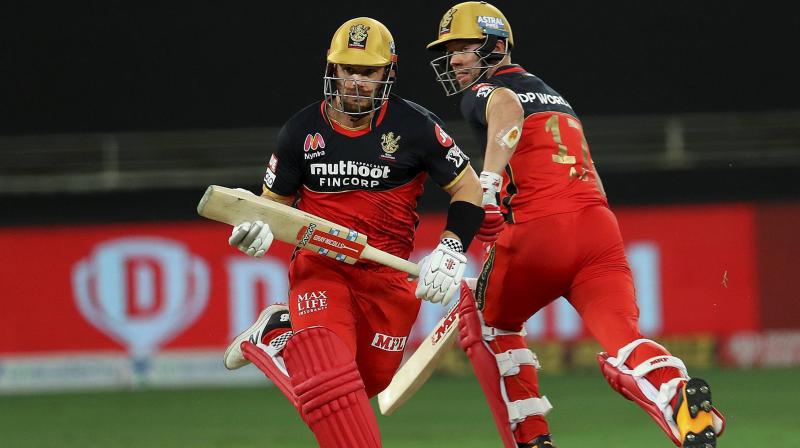 AB de Villiers turned the clock back with his magnificent hitting in the death overs, after Australia’s white ball skipper Aaron Finch scored 52 off 35 balls to get his team off to a flying start, and the elegant Padikkal upped the ante in the later half with some delightful big hits, scoring 54 off 40 balls. (Photo | PTI)

Dubai: AB de Villiers turned the clock back with his magnificent hitting after Aaron Finch and Devdutt Padikkal’s stroke-filled half-centuries took Royal Challengers Bangalore to an imposing 201 for 3 against Mumbai Indians in an IPL game despite another failure from skipper Virat Kohli.

It was De Villiers, who used all his might during the death overs to smash his way to an unbeaten 55 off 24 balls, taking the score past 200-run mark. His innings had four sixes and as many boundaries as the swift yet brutal assault of Jasprit Bumrah (0/42 in 4 overs) will be remembered for a long time.

Even James Pattinson (0/51 in 4 overs) received a lot of stick as two speed merchants accounted for 8 off the 10 sixes in the RCB innings. The remaining couple were hit off MI’s most successful bowler Trent Boult (2/34).

The last five overs produced 78 runs with Shivam Dube scoring 27 not out off 10 balls.

While Australia’s white ball skipper Aaron Finch scored 52 off 35 balls to get his team off to a flying start, the elegant Padikkal upped the ante in the later half with some delightful big hits, scoring 54 off 40 balls. The duo added 81 runs for the opening stand.

Padikkal’s innings was studded with five boundaries and two sixes and a good stand of 62 runs for the third wicket with De Villiers, who then provided the final flourish as he has been doing for years now.

The tall upright Padikkal’s second IPL half-ton will be remembered specially for two sixes off fast bowler James Pattinson. The first was when the left-hander rocked on the backfoot and punched it over mid-off and the next was a stand and deliver straight into the sight screen.

This was after Finch took on the MI attack in the Powerplay overs and attacked both Bolt and Pattinson with great gusto. When leg spinner Rahul Chahar was introduced into the attack, Finch hit him for three boundaries as the 50 came off 31 balls. At that point Padikkal was only on 16.

Once Finch was holed out off a Boult slower, in came Kohli and looked as rusty as the last match during his nine ball stay. MI skipper Sharma changed Chahar’s end, it yielded result as a delivery stopped on Kohli and his lazy inside out lofted shot was gleefully accepted at extra cover by Rohit.

Once De Villiers came in, Padikkal changed gears as both started attacking the bowlers as a square cut off Kieron Pollard brought up his half century.