Watch: Malinga teaches Stoinis how to bowl a slower delivery

Despite being 35 years old, Malinga has ensured with his variations he remains one of the most intelligent bowlers in the death overs. 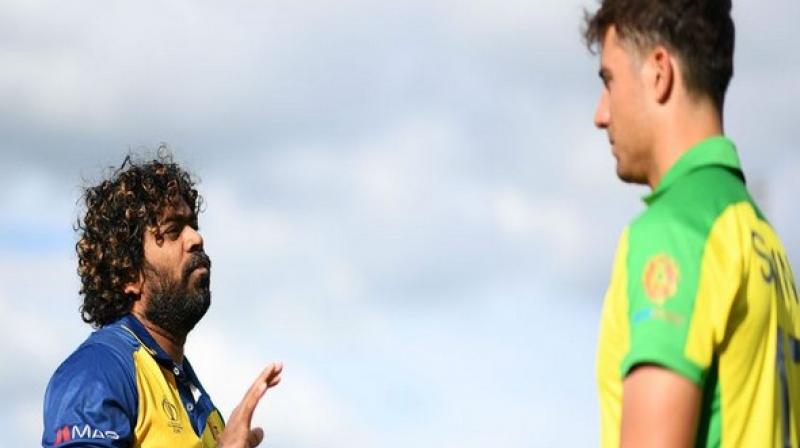 When asked how he still manages to nail it, he said it comes from putting in extra hard work after training. (Photo: ICC/twitter)

The unusual pair hung back after the match and practised a few deliveries. Malinga uses slow ball variation as his wicket-taking option. During the 12th edition of the Indian Premier League (IPL) final, the Sri Lankan pacer unleashed the delivery on the last ball which helped Mumbai Indians secure a one-run victory over Chennai Super Kings.

Even after a heavy defeat, Lasith Malinga stuck around to teach Marcus Stoinis the secrets of his slower ball 👏 #SpiritOfCricket #CWC19 pic.twitter.com/xKtr1sJBfP

"Variations is very important in the short-format game. During IPL also he (Stoinis) had wanted to know how I bowl (it). I wanted to give him tips - that's how cricket moves forward," ICC quoted Malinga, as saying after the match on Monday evening.

"Whoever wants to know, I will help them. I'll share tricks on how to bowl slow balls, which situation you will use it, why you want to use the slow one," he said.

Despite being 35 years old, Malinga has ensured with his variations he remains one of the most intelligent bowlers in the death overs. When asked how he still manages to nail it, he said it comes from putting in extra hard work after training.

He sends down at least "12 to 18 balls" and challenges himself to focus and be accurate even after getting tired following a practice session.

"Skill comes first, then you have to analyse the game. That's two things a bowler needs to (do well). Cricket is a batsman's game but bowlers can change the game, he added.

World Cup is scheduled to run from May 30 to July 14 in the UK. Sri Lanka will begin its campaign against New Zealand at Cardiff Wales Stadium, while Australia will take on Afghanistan at Bristol County Ground on June 1, respectively