Sports   Cricket  28 May 2019  ICC CEO vows to make this World Cup a 'greatest celebration of cricket ever'
Sports, Cricket

While aiming to entertain the existing cricket fans Richardson also wants to open the doors for new fans and inspire the new generation. 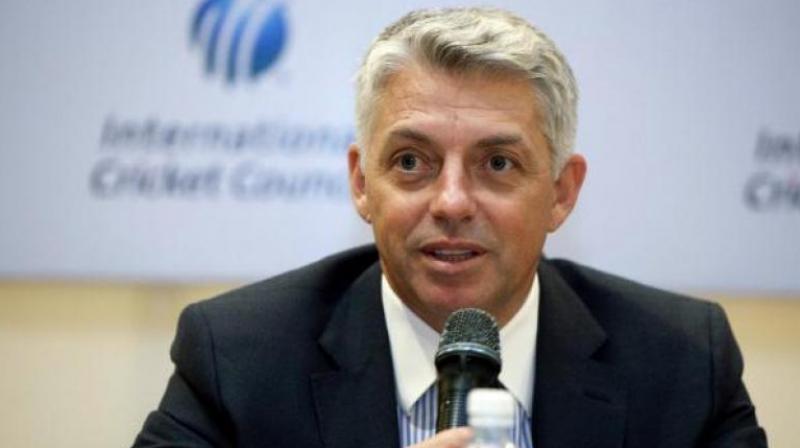 The tournament is heading towards breaking some records as there are more than three million ticket applications and some individual games received as many as 400,000 applications. (Photo: AP)

London: With the 12th edition of International Cricket Council (ICC) Men's Cricket World Cup around the corner, ICC's Chief Executive David Richardson on Monday expressed his desire of making this edition a 'greatest celebration of cricket ever.'

"Our ambition from the very start has been to make this event the greatest celebration of cricket ever. We have talked about three words in this regard -- connecting, entertaining, and inspiring," Richardson told reporters.

The tournament is heading towards breaking some records as there are more than three million ticket applications and some individual games received as many as 400,000 applications.

Moreover, the tournament broadcast will go out to more than 200 territories and with an anticipated viewing time of 13 billion hours, plus another billion video views on digital, this will have the largest reach ever for a World Cup.

While aiming to entertain the existing cricket fans Richardson also wants to open the doors for new fans and inspire the new generation.

"Connecting both with existing fans and opening the door to new fans, both in the UK and globally. We want the World Cup to inspire a new generation. We hear so many times about people who came into cricket because India won the World Cup in '83 or the West Indies in the late 70s," Richardson said.

Richardson also believes that this edition of the premier tournament will be one of the most competitive tournaments ever.

"From an entertainment point of view, for me, that is really all about the cricket. The new format with the ten best teams in the world, everyone in very good form, means that it promises to be one of the most competitive tournaments ever," he said.

"We want to grow the success of the game both in and outside of the UK. There will be some incredible broadcast figures around, but this also presents a huge chance to get new audiences engaged. The demand from a ticketing perspective has been outstanding," Elworthy said.

"This has been one of the biggest cricket ballots we have run and the results have been incredible. We have seen more than 110,000 women buying tickets, we have 100,000 under-16s coming to witness and experience the World Cup," he said.

As there will be huge crowd, Tournament safety and security director Jill McCracken revealed that they have been preparing since 2016.

"This will always be about cricket. But this is a huge global event that myself and my team have been planning since 2016. My team has a broad range of skills, they are all ex-police or military service with a huge range of experience in delivering major events," McCracken said.

"Our aim to bring consistency across 11 different venues. We work very closely with the police and the intelligence agencies sharing up to date information. Our overarching aim is to create a safe environment but without that being oppressive for the public," she said.

The opening match of the World Cup 2019 will be played between England and South Africa on May 30.