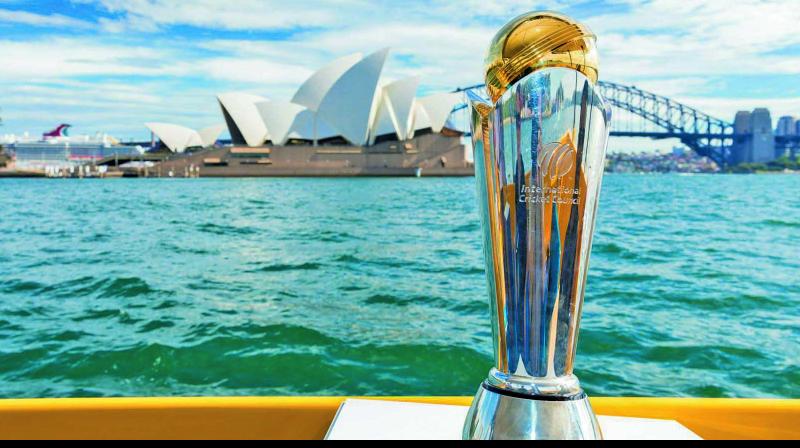 The Champions Trophy on display in Sydney during the Australia leg of the trophy tour on Tuesday. (Photo: ICC)

New Delhi: All is not yet lost for the Board of Control for Cricket in India in its quest for a larger slice of the pie from the International Cricket Council’s revenues.

Despite being outvoted nine to one on the matter of its professed share amounting to $570 million based on India’s contribution to the ICC’s purse, reports on Thursday suggested that the $290 million offered in lieu could still go up substantially.

The Indian cricket board is still holding back on naming its team for the upcoming ICC Champions Trophy in England, the deadline for which expired three days ago, For its part, the ICC has said it was still willing to stump up the extra $100 million that was put on the table by its chairman and former BCCI president Shashank Manohar ahead of Wednesday’s vote in Dubai.

The amount was rejected by BCCI representative Amitabh Choudhary, who is reported to have travelled to the meeting with a sum of $445 million in mind as suggested by the Supreme Court-appointed Committee of Administrators.

Reports also said that soon after the ICC rejected India’s $570 million demand, Manohar told Choudhary that his earlier offer of the additional $100 million (making the BCCI’s share close to $400 million — the largest portion of the revenue take) was still on the table, but no more.

“Based on current forecasted revenues and costs, BCCI will receive $293 million across the eight-year cycle, ECB $143 million, Zimbabwe Cricket $94 million and the remaining seven Full Members $132 million each,” the ICC said in a statement.

“Associate Members will receive funding of $280m. This model was passed 13 votes to one,” the ICC added. It made no mention of Manohar’s outreach to the BCCI, but signs were evident that the final say on the matter is some distance away.

Meanwhile, the BCCI has already missed the April 25 deadline for naming their squad for the eight-nation event beginning in England and Wales on June 1.

The other seven nations have named their squads but India are unlikely to face any sanction from the ICC under the rules of the 50-over tournament.

India’s reluctance stems from their long-running opposition to changes in the financial and governance structure of the ICC which would reduce their influence and earnings along with the other members of the so-called “big three” Australia and England.

The ICC board meeting in Dubai on Wednesday voted in favour of the new financial model despite the BCCI — the world’s richest cricket board — voting against.

The board also voted in favour of a new constitution, which will now be put before the ICC Full Council for approval.

The dispute has raised speculation in India that the cricket-mad nation could pull out the 50-over Champions Trophy tournament, an event they won in 2013, an option the BCCI was not ruling out.

“It is too early to make predictions since the event is more than a month away, but nothing can be ruled out. Let’s wait and watch,” a BCCI board official said on Thursday on condition of anonymity.

“We can still name the team, say even in a week or two, as we have a squad in mind and it’s just about putting a seal on it. And I am sure it will be accepted by the ICC.

Under the ICC shake-up, India stands to earn $277 million less in revenue over the next eight years, the ICC said in a statement.