Smith, Warner to join national side as ban expires on Friday

Smith and Warner are playing franchise cricket in the Indian Premier League, while Australia is in the UAE playing Pakistan. 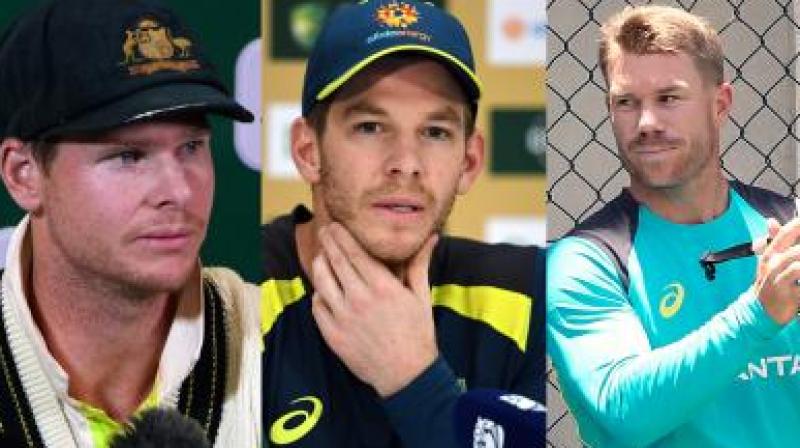 Smith, who was the top-ranked batsman in test cricket, and Warner accepted their 12-month bans for their parts in the plot. (Photo: AFP/AP)

Brisbane:  After a long, hard 12-month slog for Australian cricket, ex-skipper Steve Smith and his deputy David Warner will be allowed to rejoin their old teammates after serving bans for a ball-tampering scandal in South Africa.
Friday marks the day both senior batsmen can return to the national team, but that won't translate into an immediate recall.

Smith and Warner are playing franchise cricket in the Indian Premier League, while Australia is in the United Arab Emirates playing Pakistan with two games left after clinching a five-match limited-overs international series. The World Cup starts in late May in England, so there's not much time left for players to prove themselves, or get reacquainted. Smith and Warner met up briefly with the Australia squad in Dubai this month and said it felt like they'd never left.
But Aaron Finch, who took over as captain of Australia's limited-overs squad, said there was some nervousness at that meet-and-greet.

"It's a totally different set-up to when they left it," Finch was quoted as saying. "What's important is they're really keen to slot back into how this current side works. "They were probably as nervous as anyone coming back into the group. You'd think guys with 20-odd test hundreds would just come back in, but it is a different time and they have been out for quite a while."

The so-called "Sandpapergate" sent cricket into turmoil in Australia, where fans and ex-players struggled to fathom how a team that claimed to hold the moral high ground in the sport could suddenly lose all credibility in a clumsy cheating scheme. Smith, who was the top-ranked batsman in test cricket, and Warner accepted their 12-month bans for their parts in the plot. Opening batsman Cameron Bancroft, the player caught by TV cameras using sandpaper to change the condition of the match ball during the third test against South Africa in Cape Town, has already completed a nine-month ban.

All three players gave tearful news conferences after being sent home from South Africa, vowing to take their punishment and return as better players. The bans meant they couldn't play for their national or provincial teams, but were eligible for grade cricket in their home cities and for domestic competitions abroad. For the most part, they stayed out of the public gaze. The sanctions cost Smith and Warner multiple millions in earnings and endorsements, but both have said that's less important than the chance of returning to represent Australia.

There was fallout on the administrative side, too, with the chairman and the long-time chief executive of Cricket Australia stepping down, the high-performance manager having his contract terminated early, and coach Darren Lehmann quitting despite being cleared of any involvement in the scandal.

Former test captain Mark Taylor in recent weeks has called into question the investigation that followed the sandpaper saga, saying there was never any mention of how far back the ball-tampering efforts went or if any other players were involved. But most of the sentiment Down Under seems to be in favor of Smith and Warner returning following the harshest sanctions ever meted out to international cricketers for ball tampering. In their absence, Australia surrendered the series in South Africa 3-1, lost away to Pakistan under new captain Tim Paine and coach Justin Langer, then lost a test series to India on home soil for the first time ever. The situation wasn't a lot better in the one-day or Twenty20 formats, either.

But just recently, the fortunes of the one-day squad have turned. Australia won just 4 of 26 ODIs leading up to March 5 this year, the day it went 2-0 down in a five-match series against India. But Australia rallied to win the next three to clinch the series in India, and they're on a six-game winning streak after taking a 3-0 lead against Pakistan. Finch, who struggled with the bat for most of 2018, has been in resurgent form with the return of Warner looming, narrowly missing out on posting centuries in three consecutive games. It makes World Cup selections more interesting for the defending champions.

Australia paceman Pat Cummins said it was hard to judge how the last year has changed Smith and Warner. "Cricket was pretty much their life, and having that taken away, it took them both quite a while to adjust," he said. "Hopefully they'll both be right in the mix for the World Cup."